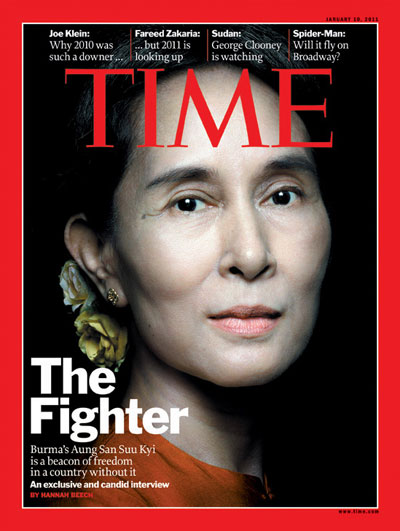 The Burmese leader Aung San Suu Kyi is on a four-day visit to India. In her interview with Nirupama Subramanian of The Hindu, the Nobel laureate remembers her association with K. Rangaswamy, a political correspondent of the paper in Delhi, during her growing-up years in the capital.

“I got to know [Mr. Rangaswamy’s] daughter at school. We were together at the Convent of Jesus and Mary. Kamla and I were in the same class and then we also went to Lady Shri Ram College together the same year. We both took political science honours, and that’s how I became friendly with them.

“But I became particularly friendly with Uncle Rangaswamy when I was preparing for my Oxford entrance…. Uncle Rangaswamy knew, because I was in and out of his house all the time, that I did not have a teacher and that I wanted to take this exam in three months.

“So he said he would teach me!

“Some people were rather scared of him, because Uncle Rangaswamy has a rather formidable exterior. But I thought he was very sweet, and he was very, very sweet to me.

“He said to me one day, which I shall never forget and which I think was so admirable about him, he said: “I’ve taught you all I can, I can’t teach you anymore, but you’re the best student I’ve ever had, so I’ll find you a teacher.” And he got a contact of his — an old student of his for all I know — a mathematics teacher. He told her to continue to teach me the rest of the curriculum, which she did, and then I managed to just scrape through the exams, and I made it to Oxford that year instead of having to wait another year. It was because of Uncle Rangaswami.