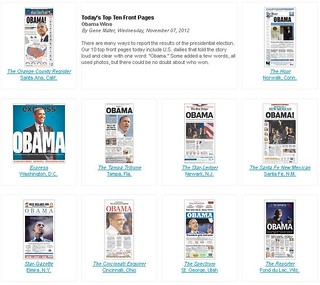 Will Barack Obama‘s reelection be front-page news in your newspaper tomorrow?

In many ways, Indian newspapers have overturned the traditional importance of the front page (the disease now afflicting even The Guardian, London) although there are many  media watchers who believe a newspaper is well within its rights to monetise its most important space.

The veteran editor Surendra Nihal Singh addresses the issue in the latest issue of Society magazine:

In this age, the advertisement department has more sway than the editorial. What do you have to say about it?

The contrasts could not be starker with today’s media. In many newspapers, it is the advertisement department that sets the terms. The newspaper owner has given himself the title of editor.

Then again, the assassination of Mahatma Gandhi was not front-page news in “India’s national newspaper”. Reason: The Hindu only carried ads on page one in the innocent days of 1948.

Also read: Selling the soul or sustaining the business?