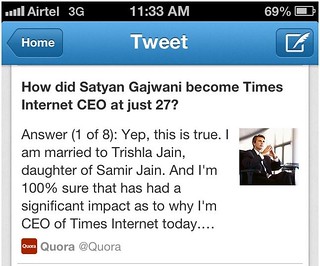 The Forbes special issue features a four-page profile of Satyan Gajwani, the son-in-law of The Times of India‘s bossman Samir Jain and CEO of Times Internet Limited (TIL), the group’s digital arm.

“It was in the last year of Stanford that Satyan’s life took a turn when he met Trishla Jain. “I didn’t know anything about Trishla’s family. We dated through college. We both moved to New York, she was doing other work at NYC.”

# Samir Jain told Gajwani that he really should think about coming to India. “He said a lot of strategic decisions are going to be made in next six months that may have long term impact, so you should be part of them.”

# “Fortunately, Trishla’s dad was very progressive, both in terms of intellect and culturally. He was convinced that we would have married anyways. He said, you are already my son for all practical purposes. So I moved here as her boyfriend and lived with them in Delhi for six months. And then when I was comfortable, we got engaged, and a year-and-a-half later, we got married in 2011.”

# “I have the autonomy to make a big change in our culture and processes. It’s partially because I am the family.”

# That Gajwani has come into Times Internet Limited at the top, as CEO, has had many people saying his success was not earned. That includes his own father. “My dad says you should work your way up a company, slog it out for five years first, so he’s like, you’ve just got put in this position so soon.”

# “In India there is a hierarchical perception: They will agree because I am the boss. That is not what I want, my intention is to stimulate debate.”

# “Digital media is different from other media. Most media companies suck at it.”

# Trishla is now carrying their baby and in a few months, they’ll be parents. “So I have got four more months of being able to work very hard and then life goes normal. He does not want to ‘outsource’ parenting. “I am excited to have kids, but if it’s too much to handle then I can just give them to Samir Uncle.”

External reading: How did Satyan Gajwani become CEO at 27?