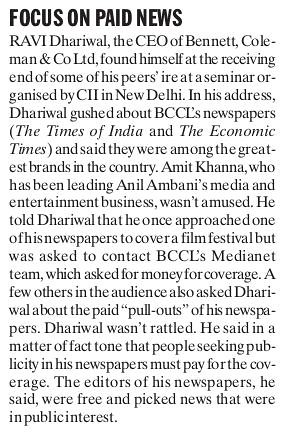 The “reverse-swing” done on Zee News by Jindal Steel is one of the most intriguing media stories in recent memory.

The steel company says it is suing the Subhash Chandra-owned network for Rs 200 crore for the demand of Rs 100 crore in lieu of advertisements allegedly made by its editors, Sudhir Chaudhary and Sameer Ahluwalia, to not telecast shows in relation to the coal allocation scandal.

In turn, Zee says it will sue Jindal Steel for Rs 150 crore for defaming the network by holding a press conference, releasing a CD containing video evidence of the reverse-sting, and making allegations of extortion against it and its editorial staff.

Meanwhile, The Times of India group, whose business paper The Economic Times and its advertorial supplements like Bombay Times and Delhi Times, were happily mentioned in passing by Chaudhary and Ahluwalia as indulging in “paid news” in the Jindal “reverse-sting” says Zee will hear from them.

Not surprisingly, Times CEO Ravi Dhariwal was on the mat at a CII event on Monday, with Amit Khanna of Anil Ambani-owned Reliance Entertainment saying his company had been asked to approach Medianet by TOI for coverage of an film festival.

The last bit of news, published in the gossip column of the Indian Express on Tuesday, has been happily reproduced by First Post, whose parent organisation TV 18 is now part of the Mukesh Ambani group, as evidence of the “media-corporate war”.