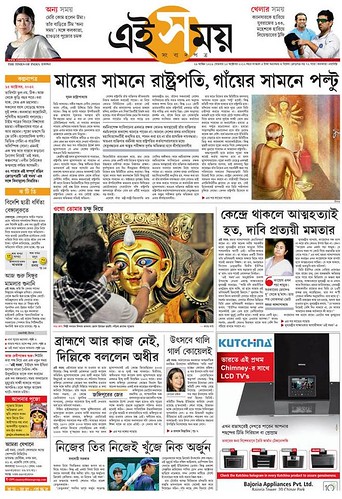 The front-page of the launch edition of Ei Samay, the new Bengali newspaper launched by The Times of India group, in Calcutta, on Mahalaya, the first day of Dasara 2012.

The main section has an eight-page wrapper before the actual newspaper (above) begins. The front page of the paper carries the tagline “Dugga, Dugga” (colloquial for ‘Durga, Durga’, a traditional invocation when embarking on a new endeavour) with the kicker at the bottom reading: opening the window to a new world.

Pages 2 and 3 carry an introduction by Ei Samay editor Suman Chattapodhyay, against the backdrop of a giant cartoon. Chhattopadhyay’s interview with West Bengal chief minister Mamata Banerjee gets crossmedia play in The Times of India. 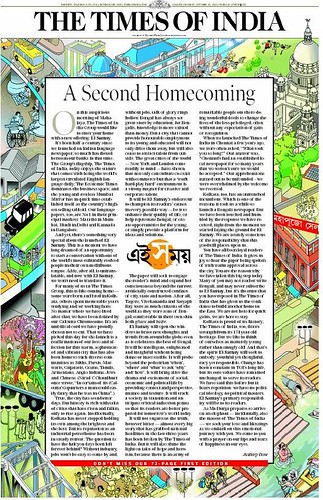 “Ei Samay will open the windows to brave new thoughts and trends from around the globe even as it celebrates the best of Bengal. It will be intelligent, enlightened and insightful without being dense or inaccessible. It will probe beyond the pedestrian ‘when’, ‘where’ and ‘what’ to ask ‘why’ and ‘how’. It will bring alive the drama and excitement of social, economic and political life by providing context and perspective, nuance and texture. It will track a society in transition and anticipate critical inflection points so that its readers are better prepared for tomorrow’s world today.

“It will not sugarcoat the truth, however bitter – almost every big story that has grabbed national headlines in the last three years has been broken by The Times of India. But it will also shine the light on tales of hope and heroism, because there is an army of remarkable people out there doing wonderful deeds to change the lives of the less-privileged, often without any expectation of gain or recognition.”

The launch of a Bengali paper pits the Times group in an eyeball-to-eyeball confrontation with market-leader, Ananda Bazaar Patrika, which recently launched a tabloid newspaper titled Ei Bela to protect the flagship newspaper. The two groups are already engaged in a battle for the English market through ToI and The Telegraph.

Also read: The grandmother of all newspaper battles

Buy our newpaper: get a Harley-Davidson free!

The new kid on the block announces an eclipse