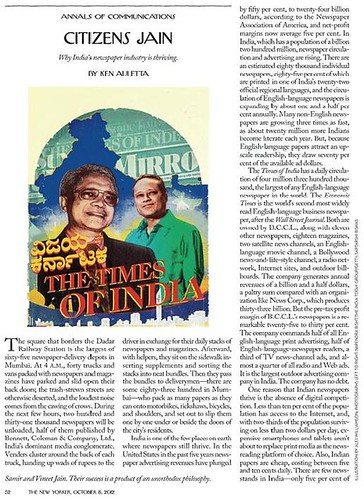 The October 8 issue of The New Yorker carries a nine-page article on The Times of India by its renowned media critic Ken Auletta in the clearest indication yet that the Times group is bracing for an IPO.

Titled “Citizens Jain”, after the brothers Samir Jain and Vineet Jain, the piece examines why India’s newspaper industry is thriving. (Orson Welles‘ Citizen Kane was a salute to the megalomania of William Randolph Hearst)

A nine-word caption at the bottom of the first page of the article provides the answer: “Their success is a product of an unorthodox philosophy.”

Auletta who spent several days in Bombay and Delhi in July reporting the story*, writes that Vineet’s older brother Samir reached out to him two years ago in New York.

“He told me about the unusual ad-sales strategies he had implemented and of his newspapers’ vibrant growth. If I visited India, I asked, would he talk with me about his business?

“He said he would.

“He didn’t. Although Vineet and Times executives generously cooperated, Samir declined to meet.

”The reason he probably doesn’t give interviews is because he doesn’t want the fame,’ Vineet told me. ‘It doesn’t drive him. He doesn’t want to be covered in newspapers and talked about. He’d rather be humble’.”

The New Yorker piece is peppered with anecdotes on Samir Jain narrated by media professionals and Times staffers.

# Namita Gokhale recounts sitting next to Samir Jain at a dinner. Jain tells Gokhale, ‘I think history doesn’t exist and if I were Prime Minister I would ban the study of history.’ When Gokhale responds that she would give him two tight slaps and a kick and if he didn’t remember, she would agree there was no history, Samir slips away and ignores her the rest of the evening.

# Shekhar Gupta, the editor-in-chief of the Indian Express, says that whenever he meets Samir Jain, he usually hands him underlined copies of Hindu scriptures and “affectionately” admonishes him that his publication is too dark.

# The inspiration for Samir Jain’s innovative pricing strategies was the zoo in Calcutta, his hometown. As he walked by on a Monday, normally a slow day after a busy weekened, he was surprised to see a long line. To boost attendance, the zoo had lowered its admission price for the day, he learned, which gave him an idea: one day a week, on Wednesdays, he would halve the price of the paper.

# Times CEO Ravi Dhariwal says the first filter Samir Jain uses in any decision is, ‘Will this be spiritually OK? Will I be able to go to my guru? He discusses a lot with his guru. And if his guru doesn’t bless it, I think he just drops it.’

In contrast, the more outgoing Vineet is all first-person.

# Although the brothers insist they do not determine content, Vineed tells Auletta, ‘I am the content architect.’ Vineett takes credit for the idea of running small, boxed editorials, under the rubric Times View, alongside some front-page stories, as a way of proposing a solution, he said, and because ‘the editorial page is only read by five per cent of readers.”

# When President Barack Obama visited India, Vineet declined an invitation for a state dinner. “What’ll I do?” he said to me. “It’s just meeting somebody, shaking hands. What’s the point?” Besides, he added, “the closer I get to politicians, the more they’ll interfere.”

# “I think of one hundred small ideas, he (Samir) thinks of three big ideas,” Vineet said. Sometimes Samir imparts fatherly advice: ‘He would say, ‘Relax. Work less. Have a good balance. What are you chasing money for?” But Vineet said, “for me, it’s not work. I love creating something. It’s so much fun—I hardly take holidays. For me, this is a holiday.”

The New Yorker profile provides sufficient indication that the Times group is poised for its long-promised Initial Public Offering, probably on NASDAQ, and Vineet Jain goes on record.

“In the long run, we might go public and use the funds to acquire TV stations,” Vineet said. “We don’t need money to grow publishing, but we do to grow television and Internet.”

Jug Suraiya on Samir Jain among others

What Raghav Bahl could learn from Samir Jain