sans serif records the demise of Gopalan Kasturi aka G. Kasturi, the longest-serving editor of The Hindu in Madras, early today. He was 87.

Although he was the helmsman of a supposedly “orthodox, conservative” newspaper, Kasturi was renowned in the industry as a torchbearer, showing the way with his knowledge of fonts, photography and printing technology, and using aeroplanes and satellites to make copies available from multiple centres.

N. Ram, the former editor-in-chief of The Hindu, who noisily squabbled with his uncle before the two joined hands in the Hindu boardroom, paid a glowing tribute on the paper’s website:

“Earlier and more clearly and determinedly than most of his media contemporaries and fellow Editors, he saw the need for the newspaper industry and journalism to embrace new and state-of-the-art technology and adapt it to our conditions while preserving the core values of journalism.

“Many a leap in newspaper technology – offset printing, facsimile transmission of whole newspaper pages, photocomposition, full-page pagination, colour scanning – found its first Indian champion in my uncle, who was always hands-on, side by side with the technical experts.

“He was enthusiastic about internet journalism and digital technology and almost till the end was regularly on his iMac working on page design and photographs and savouring the best of international newspaper websites. He believed that Indian newspapers had to raise their game in terms of production values and must not take their readers for granted.”

A low-profile editor of the old school, Kasturi also, sadly, suffered from the perception of being seen as an “establishment” man through much of his tenure, especially during the darkest phase of the Indian media, the Emergency.

In a 2010 article, Kuldip Nayar, the veteran editor and author, wrote that The Hindu under Kasturi (alongside The Hindustan Times) was the worst offender under Indira Gandhi‘s censorious regime:

“Hindu’s editor G. Kasturi became a part of the establishment. He headed Samachar, the news agency that was formed after the merger of PTI, UNI and Hindustan Samachar. He obeyed the government diktat on how to purvey a particular story or suppress it. He could not withstand government pressure.”

In 1989, when the Bofors scandal was at its peak, Kasturi got into a public spat with his nephew and then associate editor, N. Ram, as the shadow of the scam lengthened.

In October that year, The Hindu published the first part of a three-page article (authored by Ram and Chitra Subramanian) with the promise “To be continued”. However, Kasturi blocked the second instalment and published a front-page note explaining the discontinuation.

“Enough has been written supported by extensive documentation in The Hindu to establish the face of the cover-up and the non-serious pursuit of the investigation by the official agenies and give the lie to the government’s latest assertions.”

Miffed, Ram went public and issued a statement against his uncle (G.Kasturi is Ram’s father, G. Narasimhan‘s brother) for acting “arbitrarily, capriciously and in a manner highly derogatory of the traditions, norms and values of independent, ethical journalism,” and calling the editor’s note “a conspicuous insult to the traditions of independent, intellectually and socially serious, and ethical journalism.” 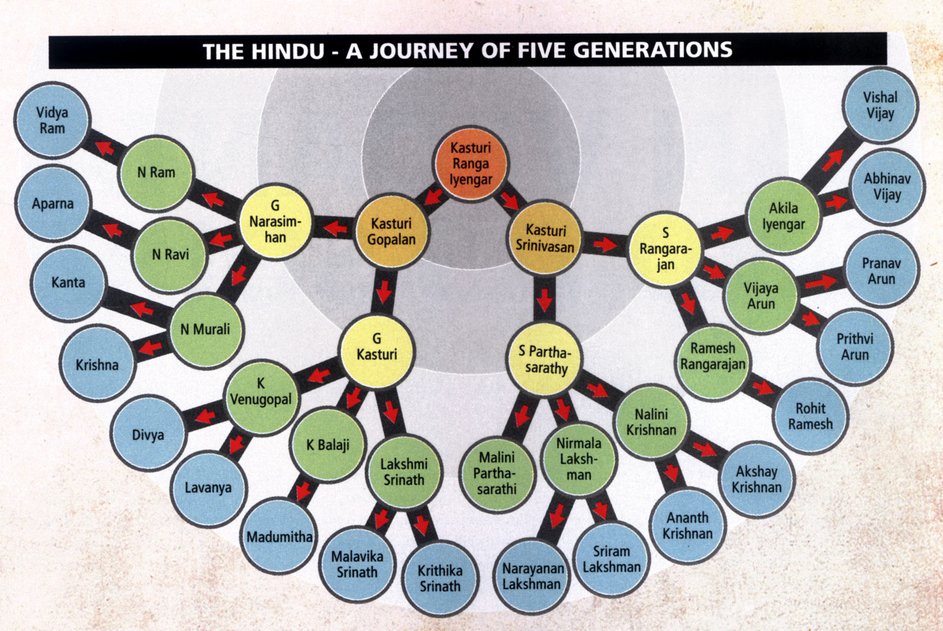 In 2003, Kasturi backed Ram in overthrowing his brother N. Ravi and their cousin Malini Parthasarathy as editor and executive editor, respectively, of The Hindu.

And in 2010 and 2011, Kasturi again backed Ram in a messy board-room battle for “professionalising” the paper that resulted in the exit of his brothers N. Murali and N. Ravi from their positions in the family-owned newspaper—and stalled Malini Parthasarathy’s bid to become the paper’s first woman editor.

Why N. Ravi quit The Hindu after 20 years as editor

Nirmala Lakshman: I didn’t step down; I resigned

N. Murali: The Hindu is run like a banana republic