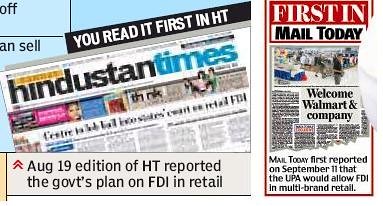 The announcement by the Congress-led UPA government to allow foreign direct investment (FDI) in retail has resulted in two Delhi newspapers—the Hindustan Times (left) and Mail Today—claiming credit on their pages for breaking the story first. The former on August 19 and the latter on September 11, 2012.