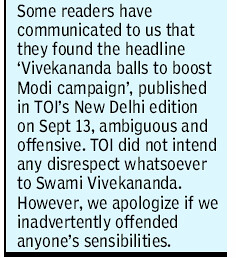 Nothing is safe these days at the hands of the supersensitive—not even a simple headline.

The Times of India ran an innocuous page one anchor on Thursday of footballs for Gujarat chief minister Narendra Damodardas Modi‘s “Vivekananda yuva vikas yatra” being made in Jalandhar.

On Friday, the newspaper had to run this by way of an apology.

The Times of India ‘apology’ on fixing report