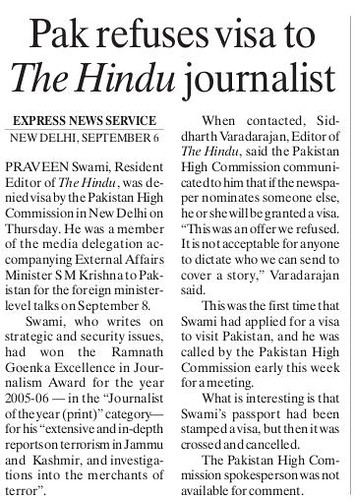 A giant pack of 61 journalists—each told to carry at least $800 in foreign currency for their hotel stay—is accompanying Indian minister of external affairs, S.M. Krishna, on his much-ballyhooed visit of Pakistan.

But Praveen Swami, the deputy chief of bureau of The Hindu in Delhi—who did a brief stint as diplomatic editor of The Daily Telegraph, London, and who has repeatedly punched holes in the Pakistani narrative of terror with its army and government officials on television—will not be one of them.

For the record, The Hindu is one of the few Indian media houses with a correspondent (Anita Joshua) stationed in Islamabad.

The Times of India reports that Times Now journalist Nikunj Garg too was denied a Pakistani visa for a trip of then home minister, P. Chidambaram:

Praveen Swami told TOI that he was called by the High Commission early this week for a meeting with Press Attache Manzoor Ali Memon that lasted for over an hour after two Pakistani officials, who did not share their visiting cards with him, dropped in.

“I was asked no questions but instead handed out sermons by the two on how Indian and Pakistani media could join hands to counter American conspiracies,” Swami said.

The journalist gave them a patient audience and told them that he was ignorant about the revelations they had made about “American plots” and he “would love to catch up on the wikileaks evidence against America they were referring to.”

At the end of the meeting, Swami was gifted a book of poetry by Ahmad Faraz and non-fiction ‘Pakistan from mountain to sea‘ by Mohamed Amin, Duncan Willetts and Brendan Farrow.

Also read: I couldn’t go to the US, my name’s Zia Haq