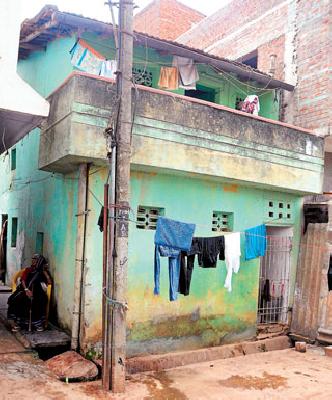 The home in Hubli of Muthi-ur-Rahman Siddiqui, the ‘Deccan Herald’ reporter arrested in Bangalore on Thursday for allegedly being involved in a plot whose targets included an editor, a columnist and a newspaper publisher (Photo: courtesy Praja Vani)

For the second day running, most newspapers in Bangalore refrain from naming the editor, columnist and newspaper publisher who were allegedly the target of a failed assassination attempt, “masterminded”, according to the police, by a reporter working with the Bangalore-based Deccan Herald.

The only news organisations to give play to the names of the three media persons was Suvarna News, the 24×7 Kannada news channel owned by the member of Parliament, Rajeev Chandrasekhar, and of which Bhat is also editor-in-chief, which repeatedly flashed their names.

The Kannada news channel TV9 ran a news item on Thursday night which showed Sankeshwar repeatedly sobbing on discovering his name on the hitlist but has avoided naming Bhat and Simha in news bulletins and other programmes.  (TV9 and Suvarna News are competitors.) 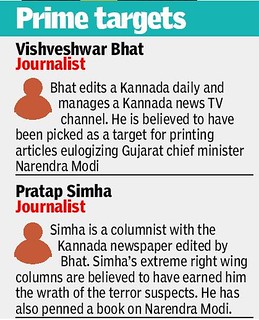 The Times of India, generally not the first newspaper which reports stories on journalists, bucks the trend (graphic, above):

Prathap Simha, a journalist with Kannada Prabha, was a target along with his editor Vishveshwar Bhat. The suspects allegedly wanted to kill Simha because he had written a book in Kannada on the Gujarat CM titled “Narendra Modi – Yaaru Thuliyada Haadi” (Narendra Modi – The Untrodden Road) in 2008.

“A laptop seized from a suspect contains this book and a picture of Simha interviewing Modi,” a senior police officer said. When contacted, Simha said: “I have also written a book on Muhammed Ali Jinnah in Kannada.”

However, Vijaya Karnataka, the Kannada daily that The Times of India group bought from Vijay Sankeshwar six years ago, extends no such courtesy. And this, although Vishweshwar Bhat was the editor of the paper, Pratap Simha its star columnist and Sankeshwar its owner.

To its credit, Praja Vani carries a long, 14-paragraph story from Hubli, the hometown of DH reporter Siddiqui (see picture, above), even as the arrests look poised to become a human rights’ issue.

In its story, Praja Vani reports the humble circumstances from which Siddiqui rose to be a reporter at Deccan Herald.

“The money he sent home each month was what sustained us siblings (three brothers and two sisters). The financial condition of our family improved only when Siddiqui joined work…. Since there is no TV set at our home, we came to know of his arrest thanks to our neighbours,” his sister Shamshad Begum said.

In a related story, Vijaya Karnataka suggests that another journalist may be picked up in connection with the foiled attack. (Market leaders Vijaya Karnataka and Praja Vani compete with Kannada Prabha, where editor Bhat and columnist Simha now work, and with Vijaya Vani, the new paper launched by Sankeshwar.)

Although the motive to kill Bhat, Simha and Sankeshwar was unclear on day one, Deccan Herald quotes anonymous police sources on day two:

“They (the sources) also claimed that they were about to execute one of their targets, a columnist of a Kannada daily allegedly harbouring an anti-minority bias. The police, who were tracking the modules for the past couple of months, had caught wind of the plot and busted the module.”

The Hindu has a clarification:

In a report from Bangalore published in the issue of August 31, headlined “Journalist among 11 arrested for ‘plotting terror in Karnataka’,” the description of some journalists who were purportedly targeted by the alleged plotters as ones “known for their virulent anti-minority columns” was unfair and unwarranted, and escaped gatekeeping mechanisms that are in place to keep such editorialising comments out of the news columns of this newspaper. That description, as well as the loose and imprecise reference to the “divergent ideologies” of two terrorist organisations are regretted and may be deemed as withdrawn. — The Editor

Also, in a surprising first, The Times of India has a rare good word for rival Deccan Herald, where Siddiqui worked:

“Hard disks from the computers used by the journalist at his workplace and other documents have been seized. The employers of the journalist have cooperated with us,” police sources said.