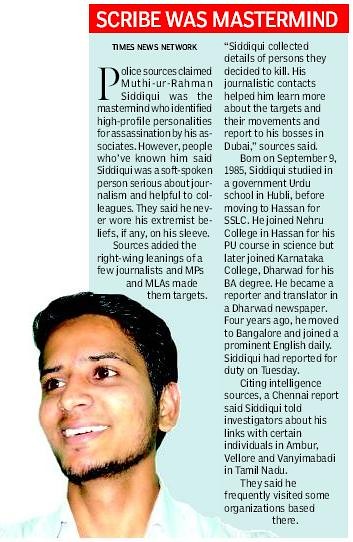 The Times of India, Bangalore, runs a picture of reporter Muthi-ur-Rahman Siddiqui but doesn’t not name the newspaper he worked for: Deccan Herald

A reporter of the Bangalore-based Deccan Herald has been arrested, along with 10 others, allegedly for links with “global terror outfits”, and the police have claimed that the group planned, among others, to assassinate an editor and a columnist, and the publisher of the newspaper they were earlier employed in.

The journalist—Muthi-ur-Rahman Siddiqui, 26 (in picture, above), an education reporter with the well-regarded Deccan Herald—has been named by the police as the “mastermind” of the alleged plot.

The editor in question is Vishweshwar Bhat, the editor-in-chief of the Kannada daily, Kannada Prabha, and the Kannada 24×7 news channel, Suvarna News (both owned by the member of Parliament, Rajeev Chandrasekhar).

The columnist is Pratap Simha, the news editor of Kannada Prabha.

The publisher is Vijay Sankeshwar, the truck operator who built Kannada no.1 daily Vijaya Karnataka (where Bhat and Simha were employed), before they moved out two years ago after he sold the paper to The Times of India group. (Sankeshwar now runs a rival daily called Vijaya Vani.)

Deccan Herald reports the story on page one in all its editions but the news of Siddiqui’s alleged involvement is buried in the seventh of a nine-paragraph story with this line:

On the inside pages, Deccan Herald quotes Siddiqui’s brother:

“Speaking from Hubli, Siddiqui’s brother Atta-Ur-Rahman said: “I know my brother. Such activities were never part of his life. He is scared of even talking aloud… How will he lift a gun?” he asked.

According to Atta-Ur-Rahman, his brother was always aiming to be a journalist and his only passion was reading.  Atta-Ur-Rahman claimed that he was certain that the police will not be able to trace any link between his brother and LeT/ HUJI.”

In a related story from Hubli, from where several of the suspects were picked up, DH reported:

“The two suspects had come to Hubli recently. They were allegedly given instructions by journalist Muthi-Ur Rahman Siddiqui to spread jihad in the region, the neighbours said.

“Siddiqui, it is said, was the secretary of the Students’ Islamic Organisation four years ago.

“Subsequently, he shifted to Bangalore where he allegedly came in contact with the banned Bangladesh-based HUJI and recruited operatives for the terrorist outfit.

“Sources said Siddiqui allegedly met other terror suspects in the City regularly and conspired to kill political leaders. They were in Bangalore on August 5 and had used a certain Imran’s computer to send hate SMSes and posted inciting video clippings online to spread rumours that North-Eastern people would be attacked.”

Kannada Prabha, the newspaper where both Bhat and Simha work, frontpages the story of the arrest of the 11 “ultras”, names the editor, columnist and publisher, but refrains from naming the journalist involved or his newspaper. (Kannada Prabha competes with Praja Vani, the Kannada daily from the Deccan Herald group.) 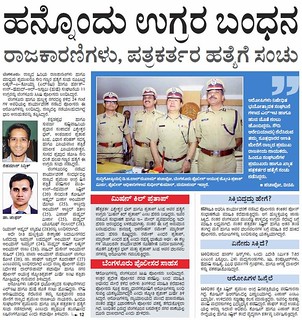 Kannada Prabha, the paper where Vishveshwar Bhat and Pratap Simha work, front-pages the story of “Mission Kill Pratap”. The paper claims the operation had been codenamed “Ramesh Marriage” to avoid suspicion

Vijaya Karnataka, where Bhat and Simha worked before they left to join Kannada Prabha, does not name Siddiqui on the front page or the potential victims.

The Hindu, which first reported that several of the 11 people were “missing” on Thursday, before their arrest was formally announced, too quoted Siddiqui’s brother:

“He is the third of the five brothers and the mildest of all. Journalism has been his passion. I returned from Dubai and we had gone on a tour. When we were in Bijapur, we received the news from a colleague of his that he had been taken away by the police for inquiry on Wednesday. Even now we don’t really know what is happening. We are shocked”, said Atha-ur-Rahman Siddiqui who is the eldest brother of journalist Muthi-ur-Rahman Siddiqui.

The last conversation he had with Muthi-ur-Rahman was on Tuesday night. “We have a small house at Bandiwad Base. I wanted to get it renovated and wanted to speak to him about it. He said it was difficult for him to get leave but would visit Hubli by Friday. I tried his number continuously on Wednesday evening but it was switched off. I cannot imagine Muthi-ur-Rahman doing all that that is being told on television. There must be some confusion, I will seek media help to get him out of all this,” said Atha-ur-Rahman Siddiqui.

Journalist vs journalist in Bangalore free-for-all