sans serif records with regret the demise of N.J. Nanporia, the half-Parsi, half-Japanese former editor of The Times of India and The Statesman in Poona. He was 88 years old.

“No other Indian I have known in 54 years in journalism has been so reluctant to push himself into the limelight. George Arthur Johnson, my first editor, and Nanporia were both silent men whose power lay in their pens. Neither was a pretentious phony prancing around the country and world. Both knew everything that happened without venturing out of the editor’s room. Nanporia’s editorial maturity, wisdom and breadth of knowledge were sorely missed in the vacuum after he was pushed out in 1975.

“One manifestation of his catholicity was the expansion into other fields of his collection of Chinese porcelain. A Ming vase needed a carved table, so he bought one. The table couldn’t stand on the bare floor. He got the right period carpet. The wall behind called for suitable decoration. And so it went on. I didn’t see his treasures. But he showed me photographs and letters from Christie and Sotheby authenticating his pieces.” 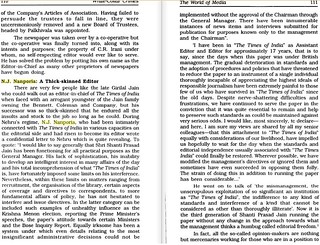 In his recent memoir, Kuldip Nayar wrote about Nanporia:

“I was unhappy in the Statesman. C.R. Irani had reduced me to the position of consulting editor from resident editor. He then wanted me to vacate my room as well, and asked me to sit somewhere else. Subsequently, he withdrew my peon and telephone too.

“The only person who stood by me during those days was my secretary, G. Barret. She refused to work with Nihal and preferred to stay on with me. I was reduced to writing only my weekly column, ‘Between the Lines’. Irani tried to stop that too but did not succeed because the editor N.J. Nanporia refused to permit that.”

Photograph: courtesy The Times of India