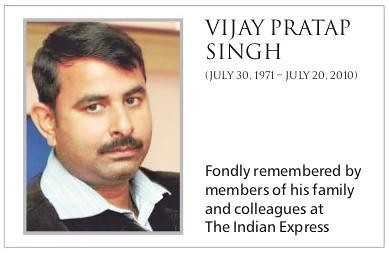 With bottomline-conscious bean counters and brand managers stomping all over newsrooms these days, rare is the media house that pauses to salute those who are no longer with us.

To its credit, the Indian Express bucks the trend.

On its pages today is an ad for Vijay Pratap Singh, its reporter who was among those killed at a blast outside the residence of a Uttar Pradesh minister in 2010, leaving behind a wife, a five-year-old son and a 10-month-old daughter.

Tarun Sehrwat, 22 and killed in the line of duty