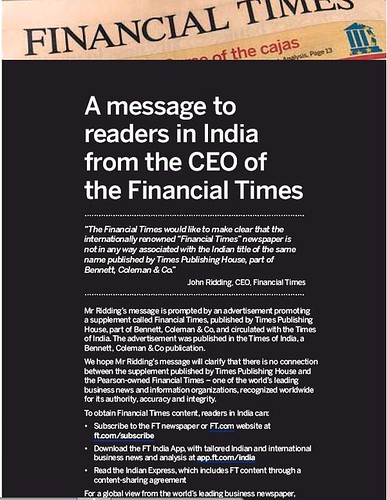 The Times of India group’s two-decade long fight with the Financial Times over the use of the FT trademark in India has taken a fresh twist with the Times group announcing the launch of a new edition of a “supplement” titled Financial Times in the Delhi national capital region (NCR).

Launched in the early 1990s in Bangalore, essentially to protect the Economic Times from a foreign player of the size and standing of FT by stymieing its entry, the Times group’s move landed in the courts, where some kind of closure was reached in May this year.

With ToI taking out ads last week for its Financial Times (“Business news now customised for Delhi NCR”), the real Financial Times has hit back with an ad in ToI‘s rival Hindustan Times, that carries a message from its chief executive officer, John Ridding:

“The Financial Times would like to make it clear that the internationally renowned ‘Financial Times‘ newspaper is not in any way associated with the Indian title of the same name, published by Times Publishing House (TPH), part of Bennett, Coleman & Co.”

Curiously, the FT advertisement does not appear in the Indian Express, with which it has entered into a tieup after a breakup with Business Standard.

John Elliott: How FT was blocked by India’s media industry