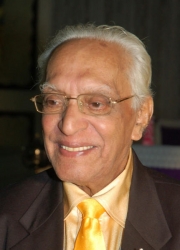 The Times of India doesn’t usually run obituaries of its staffers. But the paper makes an exception today, June 22, to mark the demise of its first Indian employee who passed away on June 1:

“Veteran journalist, historian and author Alfred D’Cruz died in Bandra after a brief illness. He is believed to be the first Indian to have been employed by the editorial department of The Times of India way back in 1947. D’Cruz was 91. D’Cruz is survived by his son and three daughters, one of whom was also employed at TOI.

“D’Cruz was handpicked for the job by the then British editor, Sir Francis Low. “There were no Indians as part of the editorial team at the time. My father often recalled working till 4am, struggling with the hot metal press to prepare the blocks for photographs because computers were yet to arrive on the scene,” his son Sunil said from Muscat.

“In 1982, D’Cruz retired as editor of TOI‘s ‘Who’s Who’ yearbook but remained active for years after that. At the age of 69, he joined a newspaper in the Gulf and worked there until the Gulf War.”

Let the record state that the news of D’Cruz’s death was reported by the Bombay-based Afternoon Despatch & Courier on June 7 and the Oman Observer on June 14 and The Times of India on June 22.

The obituary in the Oman Observer records:

Writing under the pseudonym Afie, Alfred D’Cruz was the only scribe to write the Round & About column in the Evening News of India [the now-defunct evening newspaper from The Times of India group] for some time when the late ‘Busybee’ [Behram Contractor] was on leave.

Also read: Tarun Sehrwat, 22 and killed in the line of duty