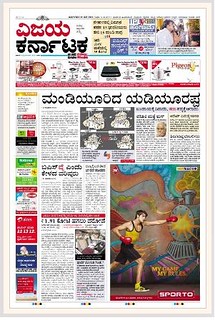 Vijaya Karnataka, the Kannada daily from The Times of India group, has a new editor: Sugata Srinivasaraju, the former associate editor, south, of Outlook* magazine. He takes over from Vasant Nadiger who was officiating as editor following the sudden death of E. Raghavan in March.

Raghavan had taken over VK from the paper’s longstanding editor Vishweshwar Bhat, who has since moved to Kannada Prabha, the Kannada daily owned by the mobile phone baron turned parliamentarian, Rajeev Chandrasekhar.

Is Vijaya Karnataka ready for a Dalit editor?