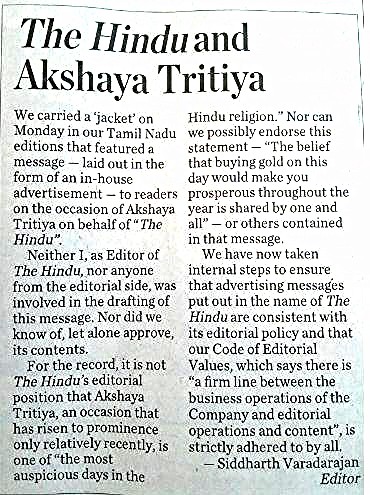 In January, a jacket advertisement on the front page of The Hindu, featuring a Tamil Nadu Congress leader who loudly proclaimed his affection for Sonia Gandhi at the beginnig of the new year— “We remain, Madamji, ever at your feet”—caused a bit of buzz.

“To all those who messaged me about the atrocious front page ad in The Hindu’s Delhi edition on Jan 1, my view as Editor is that this sort of crass commercialisation compromises the image and reputation of my newspaper. We are putting in place a policy to ensure the front page is not used for this sort of an ad again.”

Now, another jacket ad in the paper’s Tamil Nadu editions prompts a note from the editor of the paper.