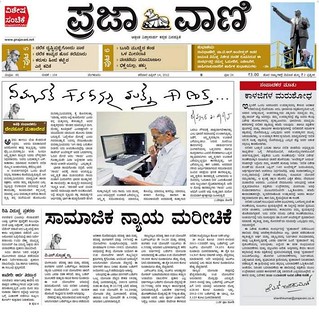 Many Indian newspapers now invite a “Guest Editor” to create some buzz.

Usually the guest is a boldfaced name: a cricketer (Yuvraj Singh), a godman (Sri Sri Ravi Shankar),  a businessman (N.R. Narayana Murthy), a news maker (Amartya Sen) or a celebrity.

On the birth anniversary of the father of the Indian Constitution, Dr B.R. Ambedkar, the Kannada newspaper from the Bangalore-based Deccan Herald group has brought out a special issue, guest-edited by the Dalit writer and social activist, Devanur Mahadeva.

In all, there are 37 pieces of text, led by an introduction from the paper’s editor, K.N. Shanth Kumar.

Among the articles, a business page report on India’s first Dalit bank; a metro section story on why Bollywood ignores Ambedkar; and an edit page piece on the need for social police.

Robin Jeffrey, whose lament on the lack of diversity in Indian (read English) newsrooms, prompted the experiment would be pleasantly surprised at the spunk of a leading regional-language newspaper.

Anybody here Dalit and speaks English?

Is Vijaya Karnataka ready for a Dalit editor?