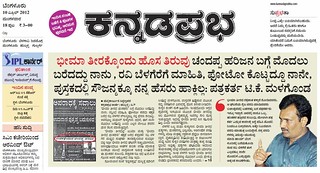 The page one story in 'Kannada Prabha' on Tuesday, in which a journalist claims to have broken a story before a Bangalore tabloid editor who is claiming credit for it.

PALINI R. SWAMY writes from Bangalore: A veritable dogfight has broken out in Bangalore between a 24×7 Kannada news channel owned by the MP, Rajeev Chandrasekhar, and the owner-editor of a weekly Kannada newspaper.

On the surface, the dispute is over credits for a recently released Kannada film.

But, deep down, the spat has served as a platform for some unabashed shadow-boxing between two leading Kannada journalists that has already seen plenty of bile being spilled on the tabloid editor’s parentage, his sexual exploits and financial dealings, not to mention his journalistic vocabulary and targets.

And everybody from film folk to co-journalists have been happily indulging in a slugfest that has also become a TRP battle between the two leading Kannada news channels.

When the Kannada film “Bheema Teeradalli” opened last Friday, Ravi Belagere, the editor of the popular Hi! Bangalore  tabloid popped up on the No.1 Kannada news channel TV9.

He claimed it was he who had unearthed the story of Chandappa Harijan, on whom the film had allegedly been based, but he had neither been consulted by the film makers nor acknowledged in the credits or compensated for it.

All through the TV9 show, the film’s producer, director and actor hemmed and hawwed on where they had suddenly found the inspiration for the film while Belagere, a regular face on Ramoji Rao’s ETV, tore into them.

The moment the two-hour TV9 show ended on Saturday, the scene of action shifted to Suvarna News 24×7, Rajeev Chandrasekhar’s news channel whose editor-in-chief is Vishweshwar Bhat and whose friendship with Ravi Belagere has seen better times.

(Belagere used to write a weekly column for Vijaya Karnataka edited by Bhat and Bhat played a guest role in a film produced by Belagere that didn’t quite see the light of day.) 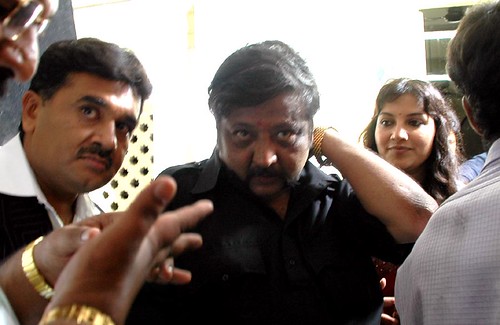 For months, the two Bangalore journalist-friends turned foes had been at each other throats, more in private than in public. It’s been open season since the film row broke.

On one night on Suvarna News, Pratap Simha, the news editor of Kannada Prabha (a Kannada daily owned by Chandrasekhar and edited by Bhat) and who had been the attacked in a cover story in Belagere’s publication earlier, threw a series of challenges to the tabloid editor.

On another night, the publisher of a competing tabloid pulled out love letters allegedly written by Belagere. A telephone caller, who claimed he was a police inspector, called Belagere “loafer” and “420” on-air.

Ravi Belagere again reappeared on TV9 to explain the many photographs and videos he had shot to prove his “intellectual property rights” over the disputed film, but the film’s key men had parked themselves in the Suvarna studios.

In between, Kannada Prabha jumped in to the action.

On page one on Tuesday, it led with the account of another journalist T.K. Malagonda, who claimed he had written about Chandappa Harijan long before Belagere, and that he had provided all the information and photographs to him and that he had not been acknowledged for his effort—the very claim Belagere was making.

On Tuesday night, Suvarna News went one step further. As the two-hour show went on, a crawler ran on TV screens: “If who have been harassed by Ravi Belagere, please dial 080-40977111.”

A long and famous friendship, it seemed, had come to an end.