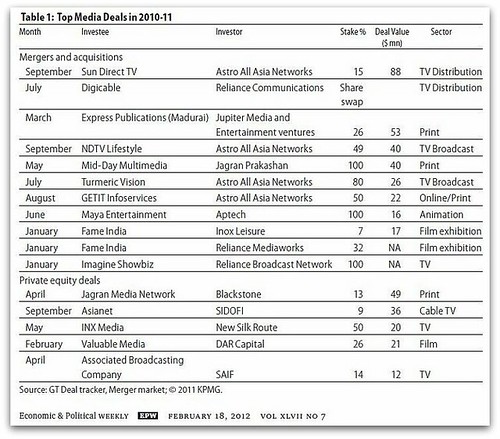 “If international best practices are to be followed, cross-media restrictions should be put in place to prevent large groups from owning stakes across several media, such as print, newspapers, television, radio and the internet. In the US, restrictions place a limit on the market-share available to one entity and that prevents newspaper/broadcast cross-ownership in the same market.

“In France and Canada, a “two out of three” law prevails, whereby companies can only own two of three of the following: terrestrial television services, radio services and daily newspapers. In the UK, the ownership of both newspapers and radio stations, and of both television channels and newspapers in the same area, is prohibited….

“The uniqueness of India’s “mediascape” suggests that while restrictions may be desirable, the safeguards deemed appropriate may not precisely be those that apply in other countries. The TRAI has suggested that a detailed market analysis be conducted by the I&B Ministry in order to ascertain which safeguards would be most appropriate in the Indian context.

“Restrictions on cross-media ownership and control will certainly be resisted staunchly by the big conglomerates in India which own properties across media types and segments. These groups would be vociferous in their criticism of any step to move towards regulation of corporate “groups” or “conglomerates” as opposed to specific “entities” – they would resist such moves tooth and nail.

“Any attempt to impose cross-media restrictions on ownership and control would be dubbed as ‘heavy-handed government censorship’, ‘a return to the bad days of the Emergency’, and a ‘reversion to the infamous licence control raj. The government will invarialy be accused of trying to constrain the media because the media is critical of those in positions of power and authority.

“The argument that since cross-media restrictions exist in advanced capitalist countries with developed media markets, such restrictions should also exist in India, will be countered by claims that since India is a developing country, any restrictions on ownership and control would stifle the media’s growth potential.”

Read the full article: Corporatisation of the media