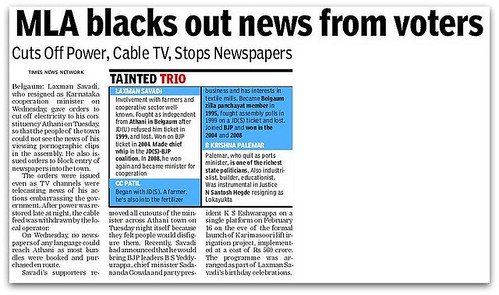 Market leader TV9 ran a news item on its 9 pm primetime news show on Wednesday, complete with a visual of its head honcho, Mahendra Mishra. The news item contained an interview with its cameraman in the legislature who caught the ministers prying into their cellphones and who then sent off an SMS to the reporter, Laxman Hoogar.

Not to be outdone, the Rajeev Chandrasekhar owned Suvarna News claimed it was the first with the story. All evening it ran news of the scandal with mnemonics and a “super” shouting “Naave First” (we were first). Its news item had one of the errant ministers referring to a Suvarna News reporter by name, which the channel played in a loop as to validate its claim.

All this breast-beating comes a day ahead of the launch of another news channel, Public TV, to be edited by former Suvarna News head, H.R. Ranganath.

No newspaper of any language reached the town as most bundles were booked and purchased by his supporters en route.

Everybody loves (to claim credit for) an expose