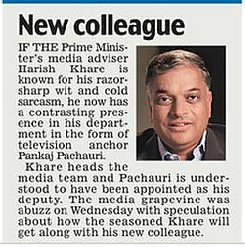 In what is perhaps the first acknowledgement of the fact that the UPA government could do with slightly better media schmoozing, Pankaj Pachauri, the host of NDTV Profit’s magazine show, Money Mantra, has been roped in as communications advisor at the prime minister’s office.

Pachauri, 48, has previously worked at The Sunday Observer, India Today and the BBC Hindi service in London. He will report to the PM’s principal secretary Pulok Chatterji.

“Pachauri, who will report to the Principal Secretary to the Prime Minister, will advise on communicating the Governments programmes, policies and achievements to the media and the public at large, particularly using the electronic, print and new and social media.”

Pachauri’s first two tweets to his nearly 26,500 followers since taking over reads:

# “Prime minister starts discussions on skill development with a dozen cabinet colleagues. Most important issue for this decade.”

# “Adviser to PM on skill development S. Ramadorai presenting roadmap to train and skill millions of youth in India.”

The PM’s media advisor Harish Khare, who has resigned in the wake of Pachauri’s appointment, has been quoted by PTI as saying: “I want to rediscover the joys of being a reporter.”

Also read: Why the PM is hopelessly wrong about the media

How well is the PM’s media advisor advising him?