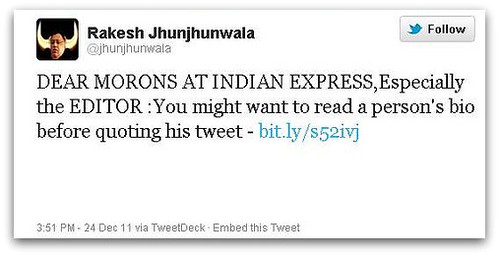 That dead-tree journalists are cut off from the digital world is evident from the manner in which they react to blogs, tweets and status updates that don’t consider them god’s gift to journalism.

Indian Express editor-in-chief Shekhar Gupta is without doubt one of the top journalists of his generation, with a magazine, newspaper and television profile that is the envy of most.

But even a man who has covered wars, tribal insurgencies, terrorism, massacres, missile attacks, jihad doesn’t have it all covered in the new age, it seems.

In his weekly column today, Gupta, 57, quotes from the Twitter feed of “Fake Jhunjhunwala”, assuming it to be from the real one, the stock broker Rakesh Jhunjhunwala.

“The upper caste, creamy layer of our society is the most prejudiced, and yet the most dominant minority in any democracy in the world. That is why even the person representing Mayawati on otherwise brilliant funny-man Cyrus Broacha’s show on CNN-IBN always has a blackened face (Dalits are supposed to be dark-skinned, no?) and that is why the man described by breathless anchors of our blue (business) channels as India’s Warren Buffett, Rakesh Jhunjhunwala, sends out tweets like this: “Don’t think [Kapil] Sibal even understands the internet. This happens when you make a lawyer an IT Minister. Like hiring Mayawati for an item song.” Of course, Mayawati could return the compliment by gifting him a very large mirror. But can you imagine the real Warren Buffett getting away with saying something like this about Michelle Obama?

The Express slip-up comes about a month after the gossip column of the paper made the same mistake of thinking it was from the real Jhunjhunwala.