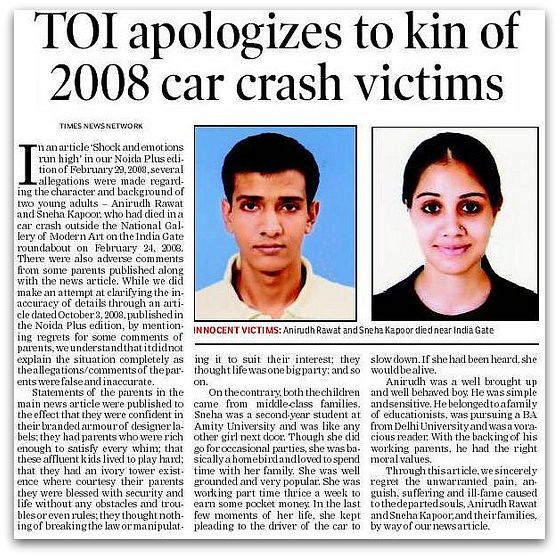 Typically, newspaper apologies in India are buried in some far corner, regardless of the extent of the error, so that no one really notices.

Market leader The Times of India sets a precedent with a 15 cm x 15 cm, three-column apology on page 3 of its New Delhi edition for a February 2008 story that had cast aspersions on the “character and background” of two young adults involved in a road accident in the national capital.

“While we did make an attempt at clarifying the inaccuracy of details through an article dated October 3, 2008, published in the Noida Plus edition [where the story was originally published], by mentioning regrets for some comments of parents, we understand that it did not explain the situation completely as the allegations/comments of the parents were false and inaccurate…. Through this article, we sincerely regret the unwarranted pain, anguish, suffering and ill-fame caused to the departed souls, Anirudh Rawat and Sneha Kapoor, and their families, by way of our news article.”

Covering 225 square centimetres, the size of the ToI apology works out to the equivalent of approximately Rs 8 lakh of advertising calculated using its Delhi ad tariff card, where each square centimetre of black-and-white space for a display ad costs Rs 3,455.