Mumbai Mirror was launched seven years ago to protect The Times of India from the new kids on the block, DNA and Hindustan Times, on its hometurf.

In Mumbai, TOI remained the dominant No. 1 with 15.35 lakh readers, while Mumbai Mirror maintained its No. 2 position with 7.54 lakh readers. The top two newspapers in Mumbai thus continue to be from the Times Group stable.

A front-page announcement in Mirror says:

“According to the latest figures released by IRS, Mumbai Mirror retains its position as the No. 2 English language newspaper in the city, still ahead of the competition and behind only the ever-large presence of The Times of India.”

On the other hand, DNA claims TOI has lost nearly two lakh readers since its 2007 launch. 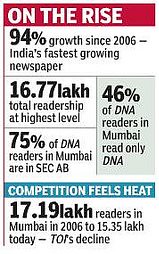 Not to be left behind, Hindustan Times‘s front-page story too harps on ToI‘s decline.

“HT‘s daily readership grew by 35,000 in Mumbai over the previous round while the main rival, The Times of India, lost 53,000 readers, according to the IRS (Q3, 2011) results…. DNA is the third among the three English broadsheet dailies in the city with an AIR of 6.8 lakh.

“Hindustan Times is the only newspaper in Mumbai to have increased readership in 12 of the last 13 IRS rounds. In fact, since becoming Mumbai’s No2 English broadsheet in December 2010, HT has added 1.59 lakh readers over the last 4 rounds.”