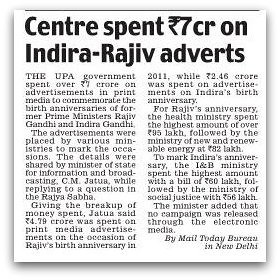 Now, the Union information minister of information and broadcasting has put a figure to the advertising blitz: Rs 7 crore in all; Rs 4.79 crore on Rajiv’s and Rs 2.46 crore on Indira’s.