The passing away of  the legendary Illustrated Weekly of India, Economic Times and Femina cartoonist and illustrator Mario Miranda in Goa on Sunday, has prompted plenty of warm reminiscences from friends, colleagues and co-linesmen, along with a vicious doosra.

Bachi Karkaria recalls her colleague from the third floor of The Times of India building in Bombay:

What can I say about Mario? That he was one of India’s most distinctive cartoonists? That he was arguably an even better serious artist in the detail and spirit with which he captured the places he lived in and visited? That he, along with Frank Simoes, gave Goa to the world?

That he was to the magazines of The Times of India what R.K. Laxman was to the daily paper? And, dare I say it, that Laxman was the Lata Mangeshkar who subtly ensured that the pedestal was not for sharing?

Pritish Nandy in the Economic Times:

Mario had a room on the same floor where I sat. And when I moved into the editor’s corner room at The Illustrated Weekly of India, a few months later, his room was next to mine. But that didn’t mean anything because Mario rarely came to office.

He worked on his cartoon strips mostly at home in Colaba and was awful with deadlines. This was largely because every afternoon, or almost, he would go for lunch or a long walk and would end up in a movie hall, all by himself.  There was no movie he didn’t see. It was the idea of slipping into a dark theatre and watching the moving picture that excited him. 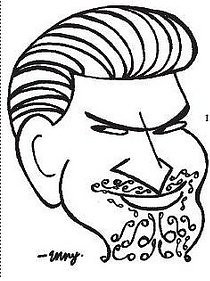 E.P. Unny, the chief political cartoonist of The Indian Express, has a page one anchor:

To call Mario a cartoonist would be like seeing no more than the elegant living room he entertained you from, through a long warm Goan evening. “Take a break and be my guest,” he said. “Come and sketch the whole of this house. Should take a week or so if I keep a close eye on you to make sure you don’t run off to do the day’s cartoon.”

Ditto the cartoonist Manjul in DNA:

“Mario was the one and only ‘celebrity’ Indian cartoonist. He endorsed a reputed clothing brand in TV & print commercials in the 1980s. In 1979, Basu Chatterjee, director of the Hindi film Baaton Baaton Mein, based the looks of the hero, a reel-life cartoonist played by Amol Palekar, on Mario.

One can see his house in Shyam Benegal’s film Trikaal. Benegal shot the film in and around Mario’s house in Goa, a heritage building known for its Portuguese past and architecture. And no one can forget the iconic visual of a Sardarji sitting inside a bulb with books, which has graced Khushwant Singh’s column in almost every Indian newspaper for many years.

Ajit Ninan in The Times of India:

“We grew up in a time when all things worthy of awe or admiration came in pairs – Tata-Birla, Ambassador-Fiat, Coke-Pepsi, and so on. In the world of cartooning, Laxman-Mario was such a pair. All my lines I have learnt from studying the two titans of those times.

“Just as Bollywood brought India to the world, Mario brought Bombay to India. His mastery of architecture and of fashion trends was one of the keys to this. Mario’s ornate illustrations of the colonial structures of Mumbai wouldn’t have been possible for anyone with a weaker grasp of architecture.”

The cartoonist Jayanto Banerjee pays an illustrated tribute in the Hindustan Times: 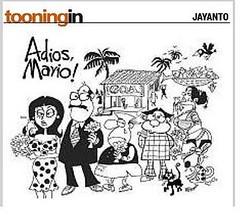 As does the cartoonist Jayachandran Nanu in Mint:

Deccan Herald has an editorial:

With Mario Miranda’s death, the country has lost an eye that looked at it with understanding, compassion and irony for many decades and saw what was most often unseen and lost to most of us…. Everything was grist to his mocking eye and subtle lines—politics, society, business, attitudes, fashions and all that was part of life. His world was peopled with things and characters everyone recognised and lived with. The world he created out of them became the obverse one familiar to us and helped us to look at our own world with greater comprehension.

Back in the ’60s, for me, Mario Miranda was ‘God’! I would lie in bed, incapacitated by asthma – wondering where my next breath would come from – and live in the make believe world of Mario’s cartoons. There was this little book titled ‘Goa with Love’ in which he had drawn cartoons of village life in Goa. The book would be by my bedside and it was as if I knew each of those characters on a first name basis…. My greatest regret in life will be not having ever met the ‘God’ of my schooldays. May his noble soul rest in peace!

Making all of us smile can make one of us cry