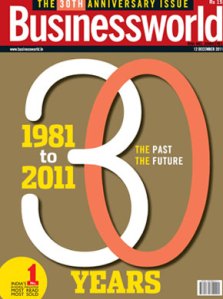 India’s second oldest business magazine, BusinessWorld, is celebrating its 30th anniversary this month. A special issue to mark the occasion features all the  editors of the fortnightly turned weekly magazine from the Ananda Bazaar Patrika (ABP) stable talking about their respective tenures:

Dilip Thakore (now editor, Education World): I served as editor of BusinessWorld for seven years (1981-87) during which — together with a strong and reliable country-wide team — I produced 166 issues of this then fortnightly magazine, and wrote over 100 cover stories which I believe transformed the national mindset about the character and potential of private sector business and industry.

Looking back in retrospect, I believe it was the missionaries of BusinessWorld (and Business India) who deserve a greater share of the credit for the 1991 liberalisation and deregulation of the Indian economy — than Dr Manmohan Singh and his over-hyped lieutenant Montek Singh Ahluwalia who were enthusiastic executives, if not architects, of licence-permit-quota raj for several decades and who were at the time earning unmerited dollar fortunes in the World Bank and Asian Development Bank.

R. Jagannathan (now editor, First Post): My predecessor Dilip Thakore had made the magazine a hit with big business by pioneering personality-oriented writing…. Thakore reported on personalities, accompanied by large, professionally shot pictures. Critics sometimes rubbished this approach as soft PR, but I believe it was an important stage in the development of business journalism in India. He humanised business writing…. Thakore helped businessmen get comfortable with the camera, and coaxed them to bare their souls to the media….

BusinessWorld saw the growing interest in share investment and created a 16-page ‘InvestmentWorld’ section — perhaps the first general business magazine to do so. A bonus: if I recollect right, an amateur technical analyst called Deepak Mohoni also debuted in BusinessWorld, and was the first one to coin the term Sensex for the Bombay Stock Exchange Sensitive Index….

Another change that looked big then, but now appears routine, is colour. For the first time ever, BusinessWorld introduced 32 pages of colour during my watch. It was a bold statement to make to our readers, but we needed that to capture the bright new tapestry of Indian business. The black-and-white dullness of the Indian economy was about to change forever. But we didn’t know it then.

T.N. Ninan (now chairman, Business Standard):  My time at BusinessWorld (1993-96) was a productive and satisfying period when we ran some really good stories and profiles, introduced prize columnists like P. Chidambaram and Ashok Desai, and saw the over-all development of the magazine and (if memory is not playing tricks) a trebling of circulation in those four years.

Two other points are sources of satisfaction today: how well some colleagues of the time have done in their subsequent careers, in India and overseas — leading publications and TV channels, and winning awards — here and internationally; and the warmth and mutual regard that members of the team still have and share.

Unfortunately, there are no photographs of the Sarkar brothers doing a gentle jig, along with everyone else including Shobha Subrahmanyan who was the chief executive, around an evening campfire above a Goa beach, where we had gone for an editorial conference but played water-polo. Those pictures might have undermined the staid image of Aveek, Arup and Shobha, back home in Calcutta (as it was then), and were confiscated!

Tony Joseph (now heads MindWorks): No sooner had I taken over than the Vajpayee government decided to shake up the sands of Pokhran with a nuclear explosion. We were discussing how to handle that week’s issue and I remember the advice one senior colleague gave me.

“Ask yourself what Ninan would do,” he said, referring to T.N. Ninan, my predecessor, former boss and probably the most influential business journalist in the country. If that comment implied a certain lack of confidence in the new editor, I pretended not to notice! With a novice at its helm, I think we pulled off that issue without disaster, but soon other bombs were to go off.

A few weeks into my editorship, a consultancy firm that ABP had hired was considering what to do with BusinessWorld — let it go, or let it grow…. We started with a staff of about 71 in April 1998 and about a year and a half later, that number was down to 51, made up mainly of new recruits. Of the original staff, barely seven or so remained. I can only say that my communication skills must have been remarkable for it to have produced that dramatic an effect. Talk about inspirational leadership!

I would come into the office every morning wondering who was going to leave that day — and what would be up on the office notice board. Those who thought the magazine was going downhill despite the rising circulation would put up newspaper cartoons depicting clueless bosses making bone-headed decisions. I still wince at the sight of Dilbert cartoons!

However, we managed to retain some senior staff and build a core team of editors and writers who together shaped a new Businessworld, one that captured the zeitgeist of changing India. The change was not just in terms of what stories we covered, but also how they were covered.

Jehangir S. Pocha (now co-promoter, NewsX): When I joined BW, my peerless predecessor, Tony Joseph, had already turned it into India’s most sold, most read business magazine…. But the best products re-invent themselves before they are forced to. With India transforming, ABP’s editor-in-chief Aveek Sarkar wanted to refresh and re-think BW.

Given that charter, I felt BW had to transcend the traditional business news weekly formula of summing up the previous seven days. Instead, I wanted BW to become a forward-looking magazine, a kind of soothsayer and sentinel
for business.

Convinced that BW had to be world-class, New York-based designer Francesca Messina was commissioned to redesign the magazine. In-house art director Jyoti Thapa Mani, her team and I spent many hours bringing Francesca’s design to life, giving BW the look and new sections it boasts today. Though a new edit team also formed at the magazine, we remained committed to BW’s inimitable mixture of clever thinking and clear writing.