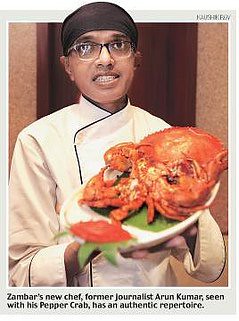 Although his reputation as a political journalist lies in tatters after the Niira Radia tapes, Vir Sanghvi is still a marquee food name in the Hindustan Times‘ Sunday magazine, Brunch. When not reporting for his paper’s hunger project, former HT managing editor Samar Halarnkar whips up a food column in the business daily Mint, titled Our Daily Bread.

Business Standard opinion pages editor Mihir S. Sharma used to do a food column of sorts in his former port of call, The Indian Express even while he was gorging on sweet meat. And rare is the journalist who doesn’t confess to spending quality time in the kitchen to “destress”.

Which leads us to ask, after cooking up stuff at their day-job—in a manner of speaking—does cooking food come naturally to journalists? Or can only a cook who knows what to serve for the body know what it takes to serve for the mind?

Sourish Bhattacharyya writes about the latest chef on the block in Mail Today:

Journalists seem to have discovered a second career in the kitchen. [Former ToI and Express staffer] Satish Warrier led the way with the much- acclaimed Gunpowder in Hauz Khas Village and now Arun Kumar, journalist-turned-filmmakerturned-chef (in picture, above), has rescued Zambar from its amateurish foray into South Indian cuisine….

Unlike Jiggs Kalra, who was the first journalist to get into the food business but has never cooked in his life, Arun Kumar ( like Satish Warrier) has been a serious hobby chef. He picked up recipes on his many filmmaking assignments across the country and replicated them for Ritu Dalmia’s catering company.