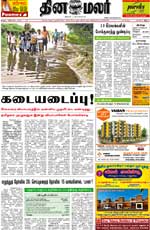 In April 2010, the Bengali television news channel Star Ananda of the Ananda Bazaar Patrika group ran into trouble with the soon-to-be chief minister of the State, Mamata Banerjee, for “continously flashing” her mobile phone number after a railway accident.

Thousands of miles away, the Tamil newspaper Dinamalar, is making news for nearly similar but more serious reasons, for publishing the residential addresses and mobile phone numbers of those at the forefront of the agitation against the Koodankulam nuclear power plant (KNPP) that has gripped the southern State.

Below is the full text of their complaint to the editors of the paper (which is published from Madras, Madurai, Coimbatore and Pondicherry) with a copy to the press council of India headed by Justice Markandey Katju.

The Dinamalar issue dated November 24, 2011 published a front page story on us, S. P. Udayakumar, M. Pushparayan, and M. P. Jesuraj, the leaders of the ‘People’s Movement Against Nuclear Energy’ that has been struggling against the Koodankulam Nuclear Power Project.

Your news item has included our personal and private information such as home addresses, home phone numbers, mobile numbers and email addresses without obtaining any kind of prior permission from any of us. Your story has also included libelous and erroneous information about us without giving any kind of evidence or material proof.

The story has been written, edited and published with the criminal intent of inciting public anger and outrage against us and provoking the public to attack us and our families.

Ever since the story is published, our family members have been receiving obscene and threatening phone calls in our home numbers, and we all have been receiving similar calls on our mobile phones from your readers who tend to replicate your own foul language and unruly conduct.

Your criminal behavior has breached every journalistic ethos and norms practiced in India. We and our family members have filed criminal complaints with the Tamil Nadu police and our lawyers have initiated legal action against your newspaper in appropriate courts.