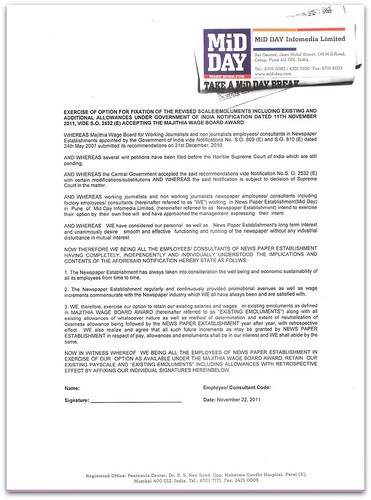 With the Union government having notified the recommendations of the Majithia wage board for journalists and other employees, newspaper managements are on a collision course.

The Indian Newspaper Society (INS) has slammed the government go-ahead despite industry representations; at least three newspaper houses have filed cases against it; and insiders say a November 16 meeting of INS was “defiantly unanimous” that newspapers should not implement it, come what may.

Meanwhile, some newspaper managements, like that of the Bombay tabloid Mid-Day (now owned by the Dainik Jagran group) have commenced their own measures to deal with the debilitating economic effects of the implementation of the wage board recommendations by circulating a bond for its journalists to sign.

“We, therefore, exercise our option to retain our existing salaries and wages of existing emouluments as defined in Majithia wage board award along with all existing allowances of whatsoever nature as well as method of determination and extent of neutralisation of dearness allowance being following by the newspaper extablishment (Mid-Day) year after year, with retrospective effect. We also realise and agree that all such future increments as may be granted by the newspaper establishment (Mid-Day) in respect of pay, allowances and emoulments shall be in our interest and we shall abide by the same.

“Now in witness whereof we being all the employees of newspaper establishment (Mid-Day) in exercise of our option as available under the Majithia wage board, retain our existing payscale and “existing emoulments” including allowances with retrospective effect by affixing our individual signatures hereinbelow.”

M.J. Pandey of the Brihanmumbai union of journalists (BUJ) writes:

“The Mid-Day management has got its staffers to sign a special undertaking that they are not in favour of the wage board and wish to opt out of the award. Last week, the staffers were called in and made to sign the opt-out form individually and on the spot. No copies of this undertaking were given to them.

“All the journalists, who are on contract, have complied. However, the non-journalist employees, who are part of the Maharashtra media employees’ union (MMEU), have refused to sign the undertaking and are awating the implementation of the award.

“It is incredibe that these journalists have made no calculations of the benefits they would have got under the wage board. This wage board, for the first time, brings the wages of non-contract employees on par with the contract employees – especially in larger media conglomerates – and that’s part of the reason for the stiff resistance of the latter to the wage board.”

Why Majithia wage board is good for journalists

9 reasons why wage board is bad for journalism

POLL: Should newspapers implement wage board?

Allow me to point out, Mr Arnab Goswami…