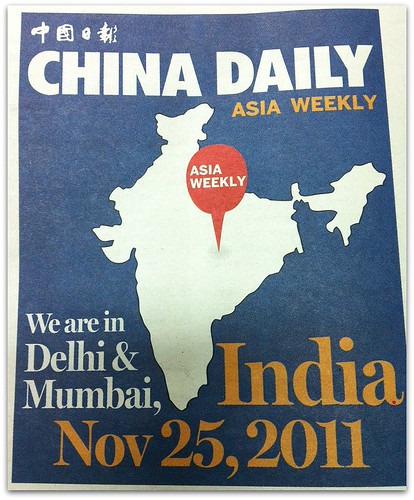 Tongue firmly in cheek, James Fallows of The Atlantic Monthly (a one-time resident of Beijing) calls it “the world’s finest daily”. Two weeks ago it began to appear on the streets of the United States.

Now, “China Daily” has spread its wings to India.

A 24-page edition of the weekly tabloid, printed in Hong Kong and priced at Rs 10, appeared in Delhi on the weekend, tucked into one of the business dailies (not The Hindu Business Line).

Barring a two-page spread of ads of serviced apartments in Hong Kong, the edition is almost completely free of any kind of advertising, except for an in-house ad (above) advertising its availibility in India.

The storylist of the inaugural November 25-December 1 is decidedly nationalistic. The cover story, headlined “Brand Global“, talks of Chinese brands likely to make up the next wave of household items.

Many of the other stories would warm the cockles of Pravda staffers. “Key gas pact signed with Turkmentistan” and “China, Brunei ink energy deals” are the headlines of news stories. There is an opinion piece on East Asia not being a US playground and another warning US against spying activities.

The only India components in the launch issue are an opinion piece by former Hindu and Indian Express analyst C. Raja Mohan on Indo-Pak ties, and a full-page profile of the PC-maker Lenovo’s India head, by a correspondent in Calcutta.

For a “Made in China” product, quality control in “China Daily” is still not cuting edge yet: two different stories on pages 4 and 5, one on China’s global brands and the other on intellectual property laws, carry the same intro: “China is bracing for a leap forward in marketing and promotion of its products across the world.”

No, wait, it is not a mistake; the stories are actually linked, just that the editors thought that a common intro would convey China’s much-renowned sense of uniformity better.

Indian nationalists and nuisance-makers might, however, like to take a second look at the map of India in the issue-ad (on page 6) in the launch issue, which only shows the parts of Kashmir as being occupied by Pakistan and not the parts occupied by China (as a New York Times map, above, shows) .

Surprisingly, though, unlike The Economist which repeatedly faces troubles at the hands of Indian censors for the “inaccurate depiction of India’s borders”, China Daily has sailed through.

Also read: The Hindu and the scribe who was told to shut up

Censored, but no copies of Economist have been confiscated