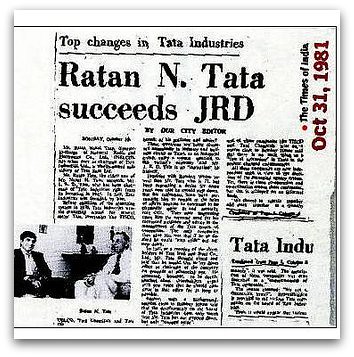 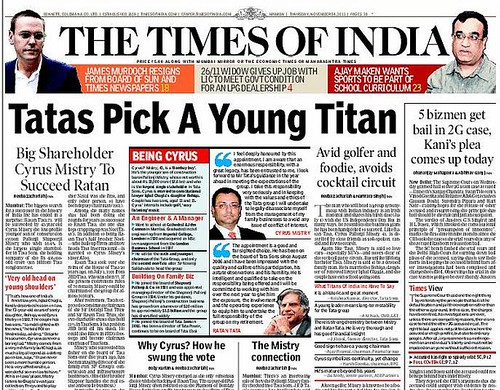 There is a change at the top of Bombay House, the headquarters of the Tatas, and the manner in which it is covered by Bombay’s biggest media house, The Times of India, is illustrative of how much journalism has changed, and how much the way journalists look at business news has changed, in the last 20 years.

# Then, when print was king and television was not commonplace, the news of the appointment was conveyed as is in the headline. Now, with television and internet having broken the news 12 hours earlier, the lead headline is a smart pun.

# Then, the front-page picture was larger than the two tiny mugshots now. Interestingly, the 1981 picture had both the outgoing chairman and incoming chairman in one frame. Not so in the tightly controlled media atmosphere of 2011.

# Then, bylines were mostly anonymous. “By Our City Editor” was shorthand for our business editor, probably the veteran D.G. Gupte. On today’s front page, there are at least three bylines: Reeba Zacharaiah, Boby Kurien, Namrata Singh.

# Then, it was just news of the change. Now, there is plenty of backgrounding (“Why Cyrus? How he swung the vote”, “The Mistry connection”) plus a colour piece on his hobbies (“Avid golfer & foodie, avoids cocktail circuit”). Bollywood also sneaks into today’s front page with the slug “Being Cyrus”.

# Then, it was all black white, now there is a profusion of colour, although much of the colour now appears in the typography in the info-box in the absence of a good picture. Then it was just one story, now it is four stories, an infobox, two quotes and five pointers.

The Times of India‘s blanket coverage is also interesting because the paper was blacklisted twice during the outgoing chairman Ratan Tata. Once in protest at ToI’s coverage of the Tata Finance scandal, and then against the backdrop of the Niira Radia tapes, which proved to be a public relations disaster for the group.

Have the Tatas blacklisted Times of India again?