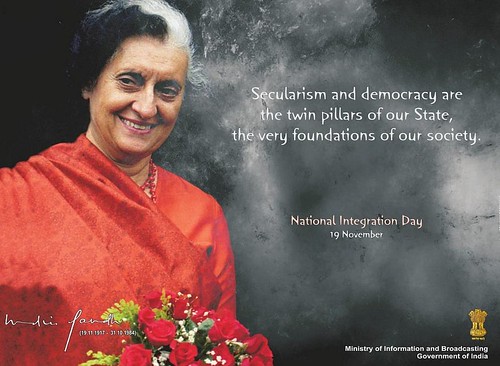 PRITAM SENGUPTA writes from New Delhi: For the final anniversary of the year of India’s “Family No. 1”—the birth anniversary of the nation’s first woman prime minister Indira Gandhi—there are 70 advertisements amounting to 32 published pages in 12 English newspapers that have been surveyed through the year by sans serif.

With this anniversary, the total number of government ads to mark the three birth and three death anniversaries of the three former prime ministers from the family—Jawaharlal Nehru, Indira Gandhi and Rajiv Gandhi—in the year of the lord 2011 goes up to 393.

In effect, the government has bought space amounting to 190¼ pages in the 12 newspapers.

# The Times of India is the biggest beneficiary of the ad blitz to mark the six anniversaries among the general-interest newspapers with 65 published ads followed by Indian Express 62, Hindustan Times 57, The Hindu 42, The Pioneer 41, Mail Today 36, The Statesman 25 and The Telegraph 18 ads.

# The Economic Times and Business Standard top the list of the busines dailies with 14 ads each, followed by the Financial Express with 11 ads. Mint (from the Hindustan Times stable) has received just one ad for the six anniversaries.

# As a group, the Times group has received 79 ads in all, the Express group 73 ads, and the Hindustan Times 58 ads.

While it is natural that ToI and HT should garner so many ads given their large circulations in the national capital, the second place for the Express group is revealing considering it sells less than five per cent of market-leaders ToI and HT in the Delhi market, which both sell in excess of 5 lakh copies.

The tabloid Mail Today, which has the third highest circulation among the Delhi newspapers, too gets fewer ads than the Indian Express.

The affection of various Union ministries, departments and State governments for the three departed leaders of the family is revealing.

While Rajiv Gandhi tops the charts with 177 advertisements amounting to 89 pages for his birth and death anniversaries, Indira Gandhi comes second with 134 ads amounting to 64 pages, followed by Pandit Nehru at a lowly 82 ads amounting to 37¼ pages.

The breakup of the Indira Gandhi ads today are as under:

The state governments advertising their love are those of Rajasthan, Haryana and Andhra Pradesh. Besides, there are ads of the national commission for women.