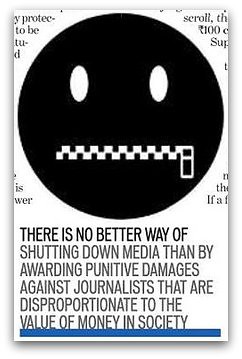 Admittedly, the Justice P.B. Sawant libel case against Times Now is a grave one with serious implications for the media across the nation. Even so, it is worth asking if The Times of India–Hindustan Times jugalbandi—most evident when the arch rivals joined hands to float a (now-defunct) tabloid to stymie the launch of Mail Today from the India Today group four years ago— is back in full flow?

Some fresh evidence of it is visible in today’s issues of the two papers. While ToI carries a long story on HT Media’s complaint against a music company over royalty, HT has returned the favour with an editorial page piece against a Pune court order directing Times Now to pay Rs 100 crore in damages to former Supreme Court judge Justice Sawant, for wrongly showing his photograph in a news story on corrupt judges three years ago.

The author of the HT piece is the leader of the opposition in the Rajya Sabha and the noted Supreme Court advocate, Arun Jaitley, who writes:

“If a former judge is entitled to R100 crore for his photograph being flashed erroneously on account of being mistaken with another phonetically similar name, will this precedent be applied by Indian courts to other ordinary mortals who complain of loss of reputation on account of far more serious allegations?

“I am not aware of a single case where even 1% of this amount has been awarded to an ordinary citizen or a public person for loss of reputation. There is no better way of shutting down Indian media than by awarding punitive damages against journalists, newspapers or TV channels that are completely disproportionate to the value of money in Indian society.

“Each media organisation is expected to exercise due care and caution. Errors, however, will take place on account of the very nature of the news circulation business. If channels or newspapers are to suffer such an order, on the assumption that R100 crore are to be the normal damages awarded to a citizen, we may in the next 10 years become a nation without media organisations.”