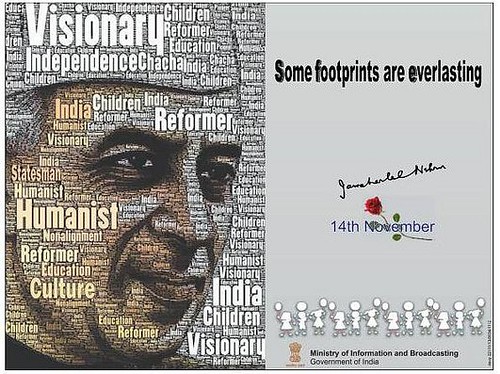 PRITAM SENGUPTA writes from New Delhi: There are 58 government advertisements amounting to 26¼ pages in 12 English newspapers today to mark the birth anniversary of India’s first prime minister Jawaharlal Nehru. In contrast, there were 108 ads amounting to 48 pages to mark his grandson, Rajiv Gandhi‘s birthday in August.

All told, so far this year, between three death anniversaries (Nehru’s, Rajiv’s, Indira Gandhi‘s) and two birth anniversaries (Rajiv’s and Indira’s), various ministries of the Union government and Congress-ruled State governments have spent taxpayers’ money in buying 323 advertisements amounting to 158¼ published pages in the 12 surveyed newspapers.

The breakup of the Jawaharlal Nehru ads are as under:

Among the advertisers wishing the dear departed leader happy birthday this year are the ministries of information and broadcasting, commerce and industry, steel, women and child development, health and family welfare, human resource development, micro small and medium enterprises, youth affairs and sports.

The state governments advertising their love are those of Rajasthan and Delhi. Besides, there are ads of Nehru Yuva Kendra and the national book trust.0