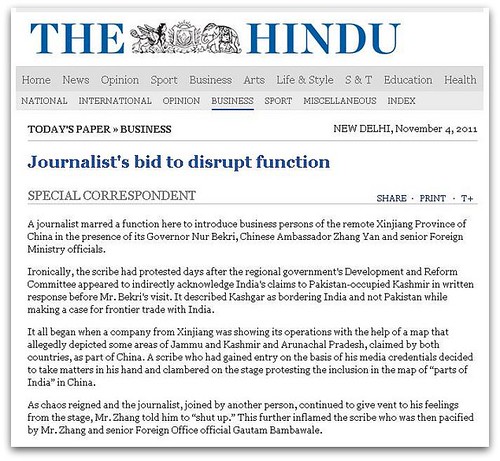 The pro-China tilt of “the world’s most readable newspaper“, The Hindu, used to be grist for the gossip mills, till one of the warring brothers of the family-owned newspaper himself decided to put it on record. An incident in Delhi on Thursday involving China’s ambassador to India underlines the insinuation some more.

At a function to promote the Xijiang province of China, Ambassador Zhang Yan was asked by a business journalist about a distorted map of India, showing parts of Jammu and Kashmir and Arunachal Pradesh as being a part of China. By most news reports, the ambassador asked the reporter to “shut up” and then tried to make peace.

Below are the headlines from some newspapers:

The Pioneer: “China envoy tells scribe to ‘shut up'”

Asian Age: “Chinese envoy tells a journo to ‘shut up'”

The Statesman: “Spat over India map”

The Economic Times: “Chinese envoy tells reporter to shut up”

DNA: “Why Chinese envoy told Indian scribe to shut up”

And here is the headline from The Hindu:

The paper’s “special correspondent” goes the extra mile to provide additional perspective to the incident:

“A scribe who had gained entry on the basis of his media credentials decided to take matters in his hand and clambered on the stage protesting the inclusion in the map of “parts of India” in China.

“As chaos reigned and the journalist, joined by another person, continued to give vent to his feelings from the state, Zhang told him to “shut up”. This further inflamed the scribe who was then pacified by Zhang and a senior foreign office official.…

“The hour-long disruption left many in the audience stunned and dissatisfied as this was the first time a business delegation led by its governor had come to India. China is investing heavily in the Xinjiang province and Pakistani businessmen, along with theri counterparts from bordering central Asian counrties, have already made inroads into the region.”

The Indian Express stands up for The Economist

Censorship in the name of ‘national interest’

Chinese hackers break into The Times of India