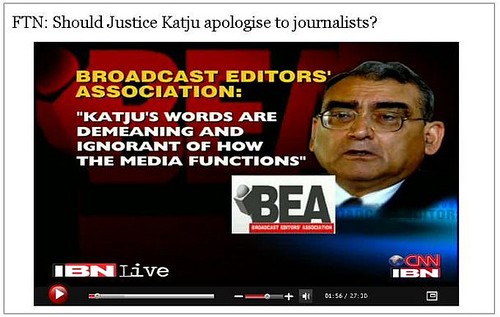 On the heels of the Editors’ Guild of India*, the Broadcast Editors’ Association—the apex body of editors of national and  regional television news channels—has slammed Press Council chairman Markandey Katju‘s remarks on the media in recent interviews and interactions.

Below is the full text of the BEA statement issued by president Shazi Zaman and general secretary N.K. Singh:

“The Broadcast Editors’ Association (BEA) strongly condemns the irresponsible and negative comments by the new Press Council of India (PCI) Chairman Justice Markandey Katju against the media and media professionals, ever since he assumed charge. Coming from a person holding an august office, the utterances are extremely disappointing.

“In a democracy, criticism is welcome against institutions by individuals and representatives of institutions. It gives a fillip to self-corrective process. The BEA believes in inviting public criticism against itself and in taking, after evaluating such comments, the required corrective steps. But the criticism being made by Justice Katju is as demeaning and denigrating as it is a manifestation of his ignorance of media working. Any criticism made in a holier-than-thou fervor defeats the very purpose it is sought to be made for.

“The new chairman should know that the electronic media has taken a giant step in creating a self-regulatory mechanism under the chairmanship of eminent jurist and former Supreme Court Chief Justice J.S. Verma.

“Justice Katju accuses media of dividing people on communal lines and hence being anti-people. The sane and balanced coverage of two recent incidents— Ayodhya Judgment and Gopalgarh Riots— belies the assertion of the PCI Chairman. Taking recourse to logical fallacy, he accuses media of branding a particular community as terrorists after every bomb blast by showing emails purported to have been sent by some terrorist organizations like Harkat-ul-Ansar (which according to him may have been sent by any mischievous person). Justice Katju, the BEA hopes, is aware of the elementary lesson of logic that says “cow is an animal but all animals are not cow”.

“Justice Katju’s claim that media professionals are of low intellectual calibre with poor knowledge of economics, history, politics, literature and philosophy shows  scant knowledge of  the great journalists the country has produced.

“While claiming to be a democrat, his demand for more “teeth” to the council, and inclusion of electronic media in it, exposes more than what it conceals.

“The BEA would like to remind the new PCI chief of media’s role in ameliorating the plight of the poor by airing news about abject poverty and rank corruption. Had it not been the case, the self-proclaimed intellectuals cozily sitting in the majestic lap of the State would not have even known its magnitude.

“For the benefit of Mr. Katju the BEA quotes here a famous statement by none other than the architect of modern India and first Indian Prime Minister Pandit Jawaharlal Nehru: “To my mind the freedom of the press is not just a slogan from the larger point of view, but it is an essential attribute of the democratic process. I have no doubt that even if the Government dislikes the liberties taken by the press and considers them dangerous, it is wrong to interfere with the freedom of the press. I would rather have a completely free press, with all the dangers involved in the wrong use of that freedom, than a suppressed or regulated press.”

“Justice Katju may well be reminded that Indian electronic media in its 16 years of existence (outside of government) has achieved many milestones in strengthening the democratic values and has, as bulwark of democracy, continued to live up to people’s expectations.”