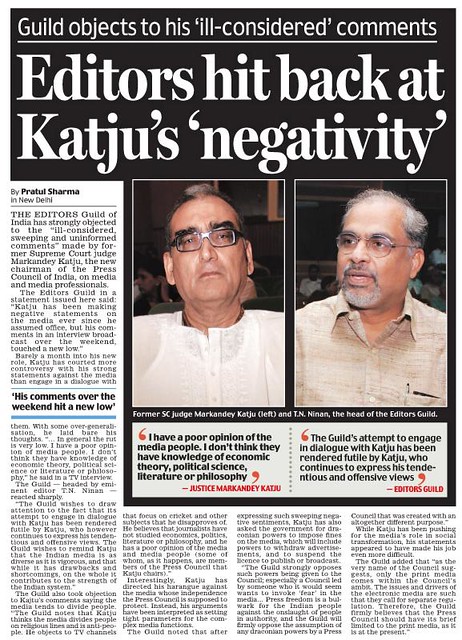 The Editors’ Guild of India* has responded to the remarks made by the chairman of the Press Council of India, Justice Markandey Katju, in recent interviews and interactions with the media.

Below is the full text of the editors’ guild response:

“The Editors’ Guild of India deplores the ill-considered, sweeping and uninformed comments on the media and on media professionals by the new chairman of the Press Council of India, Justice Markandey Katju. Mr Katju has been making negative statements on the media ever since he assumed office, but his comments in an interview to Karan Thapar on CNN-IBN, broadcast over the week-end, touched a new low.

“The Guild notes that Mr Katju thinks the media divides people on religious lines and is anti-people. He objects to TV channels that focus on cricket and other subjects that he disapproves of. He believes that journalists have not studied economics, politics, literature or philosophy, and he has a poor opinion of the media and media people (some of whom, as it happens, are members of the Press Council that Mr Katju chairs).

“The Guild notes that Mr Katju, after expressing such sweeping negative sentiments, has asked the government for draconian powers to impose fines on the media, to withdraw advertisements and to suspend the licence to publish or broadcast. The Guild strongly opposes such powers being given to the Council, especially a Council led by someone who it would seem wants to invoke “fear” in the media.

“The Guild wishes to draw attention to the fact that its attempt to engage in dialogue with Mr Katju has been rendered futile by Mr Katju, who however continues to express his tendentious and offensive views. The Guild wishes to remind Mr Katju that the Indian media is as diverse as it is vigorous, and that while it has drawbacks and shortcomings, on the whole it contributes to the strength of the Indian system.

“Press freedom is a bulwark for the Indian people against the onslaught of people in authority, and the Guild will firmly oppose the assumption of any draconian powers by a Press Council that was created with an altogether different purpose. Further, as the very name of the Council suggests, only the print media comes within the Council’s ambit. The issues and drivers of the electronic media are such that they call for separate regulation. Therefore the Guild firmly believes that the Press Council should have its brief limited to the print media, as it is at the present.”

T.N. Ninan, editorial director of Business Standard, is the current president of the editors’ guild. Coomi Kapoor, consulting editor of the Indian Express, is the secretary.