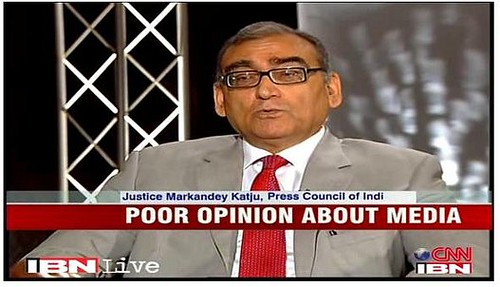 The Press Council of India (PCI), a statutory body for “preserving the freedom of the press and maintaining and improving the standards of newspapers and news agencies”, has a new chairman: Justice Markandey Katju, a former judge of the Supreme Court of India.

In an interview with Karan Thapar for CNN-IBN’s weekly programme Devil’s Advocate, Justice Katju, known for his “mayhem, humour and quotability” in the courtroom and his long, ponderous newspaper articles, lets loose:

Karan Thapar: In a recent interaction with newspaper and TV editors, you said the media have become irresponsible and wayward, and that the time has come when some introspection is required. Are you disappointed with the media?

You have said one of the basic tasks of the media is to provide truthful and objective information to form rational opinions. Is that not happening altogether or is it not happening sufficiently?

You must first understand the historical context. India is passing through a transitional period in our history. Transition from a feudal-agricultural to a modern-industrial society. This is a painful and agonising period. When Europe was passing through this period, media played a great role. It was a great help in transforming European society.

Is that not happening in India?

No. Just the reverse….

Indian media is very often playing an anti-people role. One, it diverts the attention of the people from the real problems, which are basically economic. 80% people are living in horrible poverty, unemployment, facing price rise, healthcare. You divert attention from those problems and instead you parade parade film stars, fashion parades, cricketers, as if they are the problems.

Two, very often the media (deliberately) divides the people (on religious lines). This is a country of great diversity because it is a country broadly of immigrants. We must respect each other and remain united. After every bomb blast, almost every channel report that Indian Mujahidin or Jaish-e-Mohammed or Harkatul-jihad-e-islam have sent e-mails or SMS claiming responsibility. Now an e-mail can be sent by any mischievous person, but by showing this on TV channels and next day in the newspapers the tendency is to demonise all Muslims in the country as terrorists and bomb throwers.

Third, the media must promote scientific ideas to help the country move forward, like the European media did. Here the media promotes superstition, astrology. You know, 90% of the people in the country are mentally very backward, steeped in casteism, communalism, superstition and so on. Should the media help uplift them and bring them up to a higher mental level and make them part of enlightened India, or should it go down to their level and perpetuate their backwardness? Many channels show astrology, which is pure humbug, total superstition.

You began by saying that you had a very low opinion of the media, that you were deeply dispapointed. I get the impression you don’t think very much of the media at all?

So the media is in effect is letting down India.

Yes, absolutely. Because media is very important in this transitional period. The media deals with ideas, it is not an ordinary business, dealing in commodities. Therefore, people need modern scientific ideas. And that’s not happening.

Also read: What the stars foretell for our avivekanandas

How the BJP raised witchcraft to statecraft

The only place black magic works is in your mind

How Big B has pushed India to regressive, new low