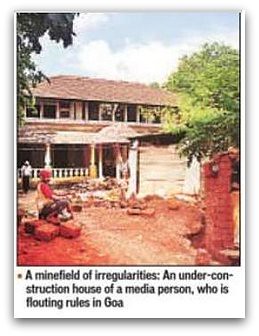 Be it the Commonwealth Games scam, the 2G spectrum allocation scam, or the demolition of Team Anna, it is increasingly clear that sections of the media are eagerly running with the wolves and hunting with the hounds.

In State after State, in story after story, media houses, owners and professionals are turning out to be players in the very stories they are supposed to be purveying, making nonsense of issues such as integrity, conflict of interest, and crossmedia ownership.

The unravelling mining scams in Karnataka and Goa are no exceptions.

In today’s Hindustan Times, the veteran theatreperson Hartman de Souza writes these telling paragraphs why it took so long for the Goan mining scam to see the light of day:

“The story that broke the skullduggery in Goa first appeared on Firstpost. Later, it was methodically pursued by reporters from Hindustan Times’ Mumbai bureau.

“But what many people don’t know is that the Firstpost story was first commissioned when the reporter concerned was working for another magazine*, which takes pride in being politically neutral.

“The story remained in limbo for two weeks. It saw the light of day only when the reporter left the organisation, took the story with him, made one more trip to Goa and uncovered some more irregularities.

“Environmentalists in Goa were, however, not puzzled by the said magazine’s reluctance to go after the Goa government and its home-grown mining barons, given that it had sent a reporter earlier and had blocked that story then too.

“The magazine’s proprietor had bought an old house in a Goan village. Even as I write this, he is bending rules to get the house refurbished into a new age spa. Just across the house was an old jackfruit tree, which was cut even when the inside of its thick turmeric-coloured centre was still gleaming with moisture.

“It’s anybody’s guess how many more old trees would have been cut inside the vast perimeter of the property to make way for lawns, garden and ponds. It doesn’t end there. The said magazine* will soon hold an ‘ideas’ jamboree in Panjim at a hotel which is owned by a mining company.”

Read the full article: You scratch my back, I’ll scratch yours

Should media corruption come under Lokpal?

‘Editors are lobbying on behalf of corporations’

Media houses are sitting on plots leased at one rupee!