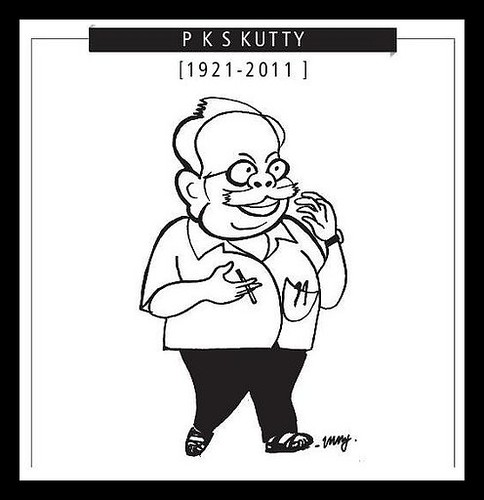 Puthukodi Kottuthody Shankaran Kutty, known simply to the newspaper reading world as Kutty, one of India’s leading political cartoonists, has passed away in the United States at the age of 90.

Part of the legendary troika of cartoonists that comprised Shankar and Abu Abraham, Kutty’s work appeared first in the now-defunct National Herald and later in the Bengali daily Ananda Bazaar Patrika.

When two practitioners, generations apart, sit down to chat, a one-way flow of wisdom should naturally ensue. Among other things, this cartoonist defied this one too.

On that August morning in 1985 when I met him first, Kutty was at the INS building earlier than the place had woken up. “I come in by nine to drop my cartoon at the Ananda Bazar office and leave before the wise guys turn up,” were his opening remarks.

He had little use for peer inputs, “however wise or otherwise”. Before anyone else in the Capital, he had made up his mind on the day’s newsmakers and the verdict signed and sealed was ready for dispatch.

Quite apart from Abu, O.V.Vijayan and Rajinder Puri, the editorial cartoonists I grew up on, Kutty came with no thought balloon. This compact cartoonist just sat there freely chatting, waving his hands about and the cartoon seemed to emerge like a gestural extension.

Pen and paper were incidental to his art.

He would grab the most non-descript of writing instruments and sketch on anything short of the blotting sheet, waste newsprint to butter paper. The drawing looked amazingly finished, with all things cartoonish in place, including that inimitable impishness which marked his work.

Surely he couldn’t have so effortlessly done this 100-metre dash day after day for as long as M.F. Husain painted. In the many meetings that followed our first, Kutty did casually allude to his craft, in terms that hardly matched the everyday business of news cartooning.

“Things are easy once you master the face like a raga. Do riyaz.”

These venerable musical metaphors were however, in keeping with Kutty’s breeding. He was trained by Shankar in the only gurukul cartooning has seen — the Shankar’s Weekly.

Shankar ran a two-room office in Odeon Building in Connaught Place in Delhi like a true ustad. Far from mild-mannered, the master with his classical notions on pen and brush to perspective could have traumatised a lesser disciple.

Kutty played along as best as he could only to ever so furtively depart from the guru’s elaborate choreographed frames to a more functional mode.

Once India’s honeymoon with Swaraj was over, the emerging politics was being held together by satraps across the country and not always in consonance with Nehruvian norms. This called for more immediate random responses and true to his calling, Kutty was ready with a style that caught the political drift away from Delhi and across the regions. This stood him well when he eventually left English newspapers to embark on an incredible leap into the unknown.

In Ananda Bazar Patrika he went on to become the best known Bengali cartoonist. He had already done his riyaz on B.C. Sen, Atulya Ghosh and the two barristers who ran Bengal — Siddharth Shankar Ray and Jyoti Basu. Kutty knew his turf but the unknown part is awesome.

This Malayali, who knew no Bangla, wrote his terse captions in English for the news desk to translate into Bangla. From Bengal’s Bihari, Oriya immigrants to the rooted bhadralok, none noticed this historic sweep of the fragile news cartoon across three languages.

In an earlier stint with this paper from 1962 to 1969, Kutty did what all the greats in this profession do — anticipate a worthy successor. He prepared the Express reader for Abu Abraham’s elegant minimalism.