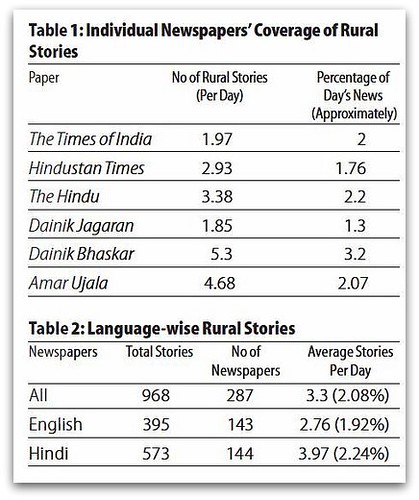 “India lives in its villages.” “Agriculture accounts for 60% of the Indian economy.” “Two out of every three Indians live in the rural areas.” The cliches abound about Bharat id est India.

Yet, a study of India’s top-three English and Hindi newspapers shows that they devote only a minuscule porportion of their total coverage to rural India’s issues, crises and anxieties.

The journalist Vipul Mudgal, who is currently with the Delhi-based centre for study of developing socieites (CSDS), selected 48 issues of The Times of India, Hindustan Times and The Hindu, and Dainik Jagran, Dainik Bhaskar and Amar Ujala from 2009, for the study.

An analysis of the news items in the six top-circulation dailies found that, on average, the papers devoted 2% editorial space for their flagship editions to the issues and concerns of two-thirds of India.

Out of between 100 and 200 items a day, just over three items had a rural theme.

The biggest portion (36%) of even this meagre news coverage was to non-agrarian issues such as crime, general or political (Naxalite-related) violence, accidents and disasters.

There is also little difference in the coverage of rural issues between the English and Hindi dailies, despite the latter being presumed to have their nose to the ground.

“One reason for their lack of interest could be explained by the fact that their readers, advertisers and journalists, particularly in the metropolitan editions, come from urban backgrounds.

“The dailies tend to be more consumer-focused and try to fulfil the needs and aspirations of educated and upwardly mobile urban consumers whose universe often has limited space for issues of poverty and underdevelopment,” writes Mudgal.