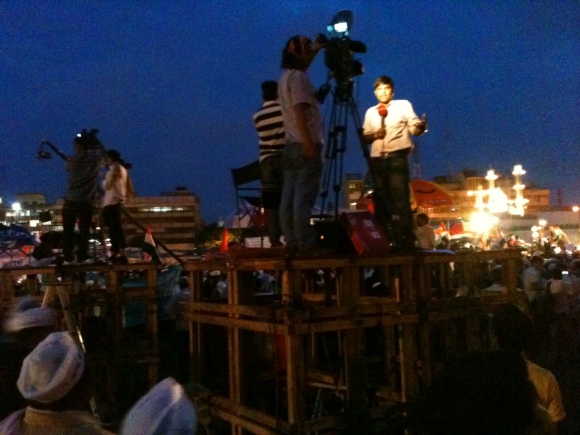 The more-than-just-a-neutral-observer position taken by sections of the media on the Anna Hazare agitation has clearly begun to rile politicians, and at least two of them cutting across party lines have argued in the last couple of days that the media too must be brought under the purview of the proposed anti-corruption legislation.

According to a report in The Hindu, Khurshid asked Headlines Today executive editor Rahul Kanwal as to why media corruption should not be investigated under the Team Anna version of the Lokpal bill.

“Do I need to go back to the Niira Radia tapes? Now you are asking why the government has not investigated. If we go ahead with the investigation, we would be accused of being insensitive. If we do, there would be a mass moment for the media.”

Again, according to a report in The Hindu, Mulayam’s demand that the media also be brought under the Lokpal was met with thumping of desks by his colleagues.

“We [Samajwadi Party] suffered in the hands of media [during the polls],” he said during a debate on corruption. Even as a section of the treasury and opposition benche demanding that “media corruption” be also inquired into by Lokpal, Mulayam went on to state that it had become a practice for electronic channels to collect money during polls and air views in support of one party.

Also read: POLL: How has the media covered Anna movement?

Photograph: Television reporters deliver their piece to camera at the Ramlila grounds in New Delhi, against the backdrop of the stage on which Anna Hazare is fasting for the Lokpal bill