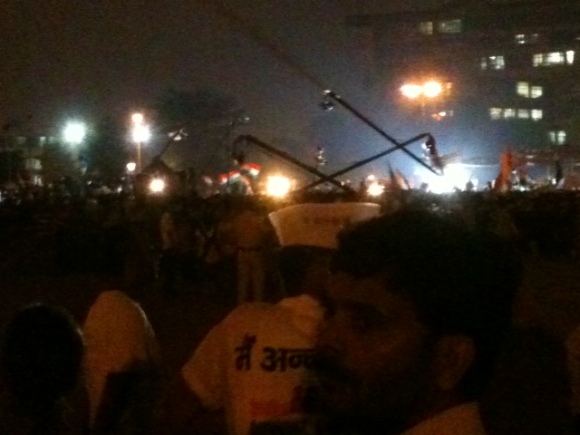 PRITAM SENGUPTA writes from Delhi: The media coverage of the Anna Hazare-led anti-corruption movement, like the movement itself, is a story in two parts—and both show the perils of the watchdog becoming the lapdog in diametrically opposite ways.

In Act I, Scene I enacted at Jantar Mantar in April, sections of the Delhi media unabashedly played along with the establishment in a “crude and disgusting character assassination”, discrediting civil society members in an attempt to strangulate the joint Lokpal drafting panel, without  showing any remorse.

In Act II, three scenes of which have been enacted in the past week at Tihar Jail, Chhatrasaal Stadium and now the Ramlila Grounds, there has been no need to invoke Armani and Jimmy Choo, after the government’s spectacular cock-ups at the hands of high-IQ, Harvard-educated lawyers who recite nursery-school rhymes to wah-wahs from unquestioning interviews.

On the contrary, it can be argued that the pendulum has swung to the other end this time round.

The Times of India and Times Now, both market leaders in number terms, have made no attempt to hide where their sympathies lie in this “Arnab Spring”, when the urban, articulate, newspaper-reading, TV-watching, high-earning, high-spending, apolitical, ahistorical, post-liberalised, pissed-off-like-mad middle-class gets worked up.

When the market leaders go down that road, the others are left with no option but to follow suit.

Obviously neither extreme can be the media’s default position. However, unlike last time when there was little if not no criticism of the “orchestrated campaign of calumny, slander and insinuation“, at least two well known media figures  have found the courage to question this kind of wide-eyed, gee-whiz reporting.

Sashi Kumar, the founder of India’s first regional satellite channel Asianet and the brain behind the Asian College of Journalism (ACJ), in Outlook*:

“In the race for eyeballs, a section of the media—some TV channels in particular—give the impression of sprinting ahead of the story and dragging it along behind them. What defies imagination, even as it stretches journalistic credibility, is that the messengers become the lead players, directing the route the story will take, conjuring up twists and turns where there are none, and keeping the illusion of news-in-the-making breathlessly alive….

“The relationship between such media and their essentially middle class consumers is becoming uncomfortably incestuous. When respondents cluster around a camera for a vox pop, they are not so much required to offer their independent view on an issue as add to the chorus of opinion orchestrated by the channel. A photo op masquerades as a movement. Dissident voices get short shrift. It is more like a recruitment drive than a professional journalistic exercise to seek and purvey news.

“Increasingly, the channel’s role seems to be to trigger and promote a form of direct democracy by the middle class. Politics and politicians are routinely debunked; even representative democracy doesn’t seem to make the grade.”

“Critics of the Hazare campaign have questioned the media narrative as well, accusing wall-to-wall TV coverage of holding up a permanent oxygen mask to the protests. It’s even been pointed out that Noam Chomsky’s scathing commentary on the mass media -‘Manufacturing Consent’ would be re-written in TV studios today as Manufacturing Dissent.

“But again, if the TV coverage of the protests is overdone, it only proves that the UPA’s perennial disdain for the media — and the diffidence of its top leaders — has given its opponents the upper hand in the information battle. There is something so telling about the fact that 74-year-old Anna Hazare made effective use of the social media by releasing a YouTube message from inside jail and the PM of India’s oldest political party is still to give his first interview to an Indian journalist.”

Photograph: Besides temporary studios set up by almost all the news channels, nearly a dozen Jimmy Jib cameras (swinging cameras on cranes) hover over the heads of those assembled at Anna Hazare‘s fast at the Ramlila grounds in New Delhi on Friday.