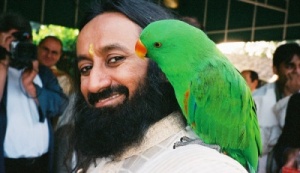 “Nine years ago, I was invited by the Art of Living Foundation to interview Mr Shankar.

“Mr Shankar was in the house of a wealthy businessman in South Mumbai.

“In the living room he sat on a large, embellished, thronelike chair as about 50 of Mumbai’s rich and famous sat on the floor, among them the film actor Vinod Khanna and the actress Nagma.

“At Mr Shankar’s feet sat a newspaper reporter, taking down notes as he spoke.

“All the interviews that evening were supposed to be conducted in this manner, with the reporter on the floor, at his feet, and he on the throne.

“When it was my turn, an absolute silence filled the room as I dragged a chair toward him. When I sat down, there was an audible moan from his followers. The interview did not go well. Most of his answers were snubs that elicited loud guffaws from his audience.”

Read the full article: Indian spiritualism made for the new age