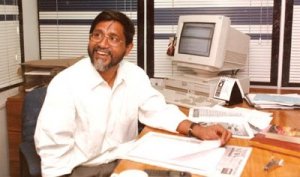 Fourteen years ago today, Surendra Pratap Singh aka S.P. Singh, the founder-anchor of Aaj Tak, the 30-minute Hindi news bulletin that became a 24×7 news channel, breathed his last after a fortnight-long battle for life.

“SP” was one of the first print journalists to successfully graduate to television—he had edited the Hindi  daily Navbharat Times and the weekly Ravivar—and his daily bulletin “expanded the limits of television journalism in a never-before fashion with its common man’s eye view style“.

Singh passed away at age 49 just before Aaj Tak could turn into a full-fledged news channel after the government decided not to renew its contract with Doordarshan. But by then he had inspired a whole new crop of television stars: Dibang, Sanjay Pugalia and Ashutosh to give just three examples.

Today, on Twitter, a few of his friends and colleagues have been remembering a mentor and a pioneer:

MILIND KHANDEKAR: No words can explain the loss…

PRAGYA MOHANTY: He was the first person reading news who smiled. Like really.:)

DIBANG: Agree with you and what an assuring smile. Was great education just hanging around him. Miss him deeply.

DIBANG: So true! He had a great ability to discern what is news. He never touched what’s past and what’s yet to be!

DIBANG: He knew what is news, he had that ‘pakad‘, and when he read news it was reflected in his expressions, his voice, his body language.

PRAGYA MOHANTY: Pakad is the word. (Prannoy Roy‘s) The World This Week was more like a theory class and watching SP was like attending the practicals.

DIBANG: Yeh thi khabrein aaj tak, Intzaar kijiye kal tak. Was always in studio with him when he read the news.

DIBANG: When he fell in the bathroom. He called out his wife Shikha (Trivedy) and told her: Dibang ko jaldi bulao. Those are his last words.

DIBANG: It was a Monday when we took SP to hospital. He wasn’t conscious, never returned. Was with him whole of that sunday. I remember all the conversation i had with him that Sunday. For us its like he is still there with us.