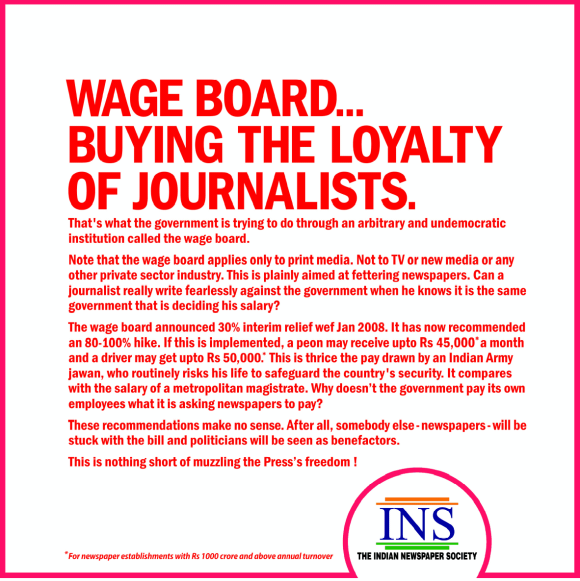 SHARANYA KANVILKAR writes from Bombay: The proprietors, promoters and publishers of India’s newspapers and magazines haven’t had a word to say on some of the biggest issues confronting Indian media—and directly impacting the trust and faith of the reader—in recent years.

Paid news, in which advertisements are couched as news? Silence.

Private treaties, in which vested interest is touted as ads? Silence.

Medianet, in which anybody can buy his or her way into the paper? Silence.

Cross-media ownership, which results in monopolies shutting out choice? Silence.

Dumping of copies to pump up circulation numbers? Silence.

Complicity of journalists with lobbyists? Silence.

The killing of journalists in the line of duty? Silence.

But the big guns of the Indian Newspaper Society (INS)—which represents 1.017 small, medium and large members—have suddenly sprung into life as one in slamming the recommendations of the G.R. Majithia wage board with the undisguised intent of blocking its implementation.

In just the first 15 days of this month, The Times of India has published four articles on the subject:

# June 2: The paper’s CEO Ravindra Dhariwal weighs in on the subject in an edit-page piece titled “Muzzling the Media”

# June 4: “Wage board proposal will force many newspapers to shut down: INS”

# June 6: “Wage boards challenged in Supreme Court” on the Ananda Bazaar Patrika group filing a petition in the Supreme Court

And now, ToI and The Economic Times have published an INS advertisement on its pages, essentially encapsulating the key points wage board opponents have been making for years.

For good measure, Ashish Bagga, the CEO of the India Today group and a prominent functionary on INS, has written an opinion piece titled “How to kill the print media” in the latest issue of the magazine, and Hindustan Times has a report titled, “Wage board outdated: experts“.

The theme of all the pieces is the same: 1) The newspaper industry is the only industry in the country to have a statutory wage board; even other sectors of the media, like TV, radio, internet don’t. 2) The wage hike recommended takes salaries of non-journalistic staff way beyond what the government itself pays its staff. 3) The wage board recommendations could end becoming a convenient tool for the government to turn the screws on inconvenient newspapers and agencies.

All fair points, no doubt, when viewed purely through the prism of the bottomline. But it is not so much the loyalty of journalists that INS is bothered about in opposing the wage board recommendations (most in the big newspapers are now on contract) but the disloyalty of non-journalists in not falling in line.

Easy hire-and-fire policies may yet be a legitimate objective to follow for proprietors, promoters and publishers to achieve efficiency, but where is the INS when other questions of importance confront journalists and journalism, many of which affect the small players in whose name they are fighting the battle against the Majithia board?