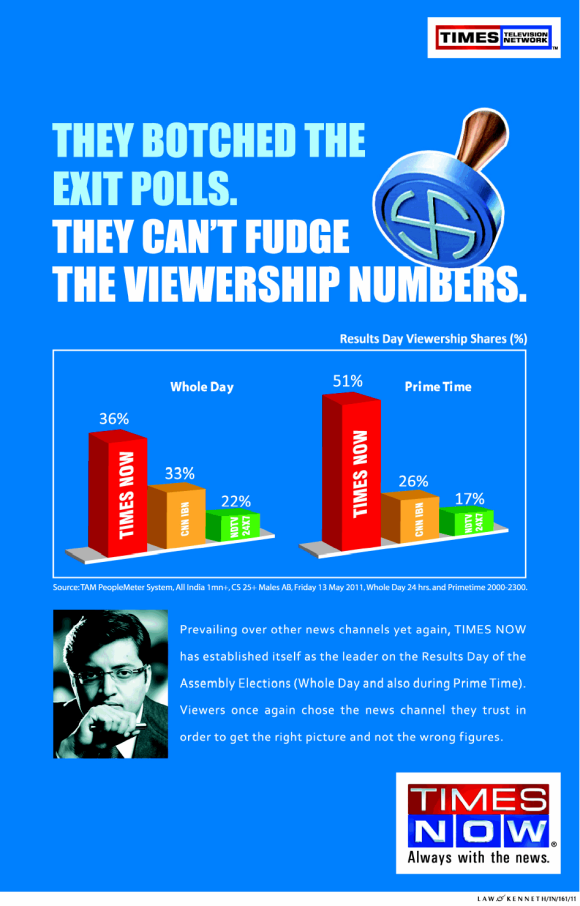 The verdict in the assembly elections to the five States has been signed, sealed and delivered, but the battle is still on between the English TV news channels, with both Times Now and CNN-IBN making contrasting claims of their leadership on E-day and the accuracy of their exit poll and survey predictions.

As the former Times Now CEO Chintamani Rao wrote some months ago:

“These are not conflicting statements. But when you see the ads from which these claims are quoted, notice the asterisk: *conditions apply. It seems that at every news channel there is someone whose job is to slice and dice TAM data until they find a combination of audience, markets, and dayparts in which that channel is No. 1. The most prolific of these data analysts seems to work at CNN-IBN.”

Nevertheless, Times Now‘s potshot at CNN-IBN’s post-poll survey—“get the right picture, not the wrong figures”—is interesting because, for all its heft, Times Now was happy doing a a cheap “poll of polls” debate in the studio, while CNN-IBN was spending good money to feel the pulse of the nation through Yogendra Yadav‘s CSDS.

Also read: It’s their opinion that they have done an exit poll

With so many polls, somebody had to get it right?

Never let facts come in the way of a good story